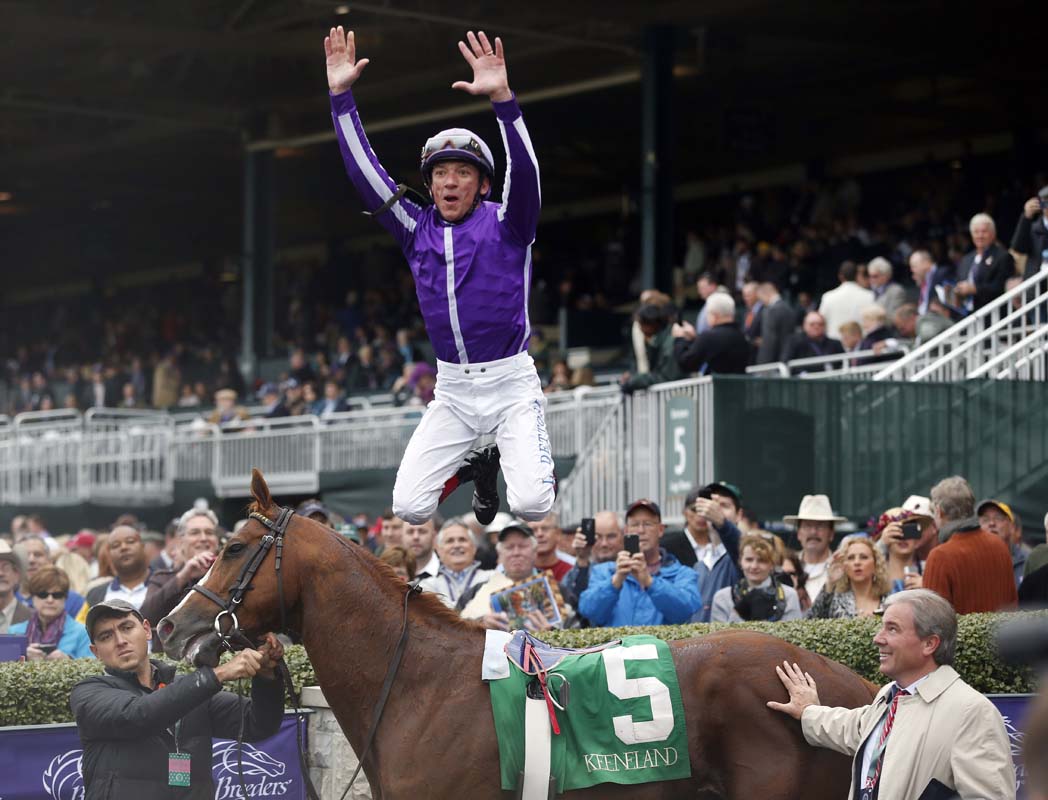 Jockey Lanfranco Dettori jumps off of Pablo Del Monte in the winner's circle after winning the first race of the day at Keeneland race track Friday, Oct. 30, 2015, in Lexington, Ky.

Great Italian jockey Lanfranco Dettori turns 45 on Dec. 15. Like so many other great riders, Dettori has had an impact on the Breeders' Cup. He's had many great successes and one instrumental, huge, failure. Dettori's possible mount in this year's Breeders' Cup is the Kathy Ritvo trained Spain Burg in the BC Juvenile Fillies Turf. That's the only one that I could confirm. Considering Frankie's success at the BC, we shouldn't be surprised if he shows up on other mounts on both Nov. 4 and Nov. 5. In the meantime, check out my Top 5 for Mr. Dettori!


1. Swain, 1998 Breeders' Cup Classic - I have to put this at the top of my list because I had keyed Swain in my Pick 4, trifectas, exactas, you name it. Oh, I was angry at Frankie for this ride, no doubt. But, truth be told, looking at it again, I'm not sure anybody would have beaten Awesome Again in that race. Silver Charm and Swain weren't speeding up as much as I thought they were while Awesome Again had a stunning burst of speed in the stretch in order to get to the wire first.

2. Ouija Board, 2006 Breeders' Cup Filly and Mare Turf - What a ride aboard Ouija Board in the 2006 BC Filly and Mare Turf. Frankie didn't push the button until he had to. My Typhoon and Wait A While, both terrific grass horses, had no shot after Frankie told Ouija Board to go in this race. Once of the reasons that I love this race is how it shows what a great jockey does when he or she knows, without a doubt, that he or she is on top of the best horse in the race. Frankie let the race unfold while not getting too fancy with Ouija Board.

3. Raven's Pass, 2008 Breeders' Cup Classic - You can hear it in Trevor Denman's voice as Curlin flattened out in the stretch. That's the real reason that I remember Dettori's ride aboard Raven's Pass in the 2008 Breeders' Cup Classic. Make no mistake, Frankie knew exactly what he was doing in the race. He pushed the button on Raven's Pass when Robby Albarado pushed the button on Curlin. Frankie also made the decision to keep Raven's Pass wide throughout the entire race instead of trying to beat Curlin by going inside the way that John Velasquez did aboard Henrythenavigator. Man...but if this race hadn't been run over an all weather track...Curlin might have had it.

4. Wilko, 2004 Breeders' Cup Juvenile - Tom Durkin said it best,"Here's a resurgent Wilko!" Afleet Alex, one of the greatest horses to not win the Triple Crown after finishing third in the Kentucky Derby and taking home the Preakness and Belmont, had Wilko beat around the turn. It appeared as if Wilko was done. Such is the greatness of Lanfranco Dettori. He used all of his horse whispering magic to get Wilko to somehow start moving with enthusiasm again. By the time they hit the wire, Wilko knew he had Afleet Alex beat. Afleet Alex knew that Wilko had him beat. Look at how both horses relaxed close to the wire. Another unbelievable ride in a Breeders' Cup race by Frankie.