Mike Smith’s responsive and talented ride on Arrogate in the Dubai World Cup led the Hall of Fame jockey to be honored as Jockeys’ Guild Jockey of the Week for March 20-26, 2017. The award is voted on by a panel of experts for riding accomplishments by members of the Jockeys’ Guild, the organization which represents more than 950 riders in North America. 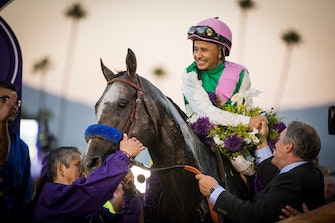 On a weekend when sports fans were divided by college basketball allegiances, racing fans across the country stood united on Saturday, at least for two minutes, as Arrogate faced some of the world’s best older horses in the $10 million Dubai World Cup (G1) at Meydan. As in the NCAA tournament games, racing fans were treated to a roller coaster of emotions.

Arrogate missed the break, was bumped on both sides and shuffled back to last place to start the race. Closing is not the colt’s typical running style, but the quick response by Mike Smith gave Arrogate a fighting chance.  Channeling tactics previously used on champion mare Zenyatta, Smith kept Arrogate off the rail and relaxed near the back of the field. He began to urge him in the far turn, picking off rivals one at a time, until he passed Neolithic and Gun Runner to take the lead in the stretch.

Despite what appeared to be a disastrous beginning, Smith and Arrogate won the Dubai World Cup by over two lengths under a hand ride for owner Juddmonte Farms and trainer Bob Baffert.

The start was Smith’s only race of the week. His 2017 earnings now approach nearly $15 million in just 55 starts. The two-time winner of the Eclipse Award for Outstanding Jockey, Smith has won 5,386 races and accumulated lifetime earnings of over $294 million.

The win padded Arrogate’s statistics as well: the colt is now seven for eight in a racing career that is less than a year old and his lifetime earnings exceed $17 million. With his win in the Dubai World Cup, Arrogate officially dethroned 2016 Dubai World Cup winner and multiple champion California Chrome as the richest North American racehorse.

JockeyTalk360.com spotlights the riders across North America and around the world who may be the bravest, toughest and most accomplished of all athletes. The Jockeys' Guild Jockey of the Week is selected by a vote of representatives of America’s Best Racing, The Daily Racing Form, Equibase, Horse Racing Nation, The Jockeys’ Guild, The Paulick Report, The Thoroughbred Daily News, National Thoroughbred Racing Association, National Turf Writers and Broadcasters, Thoroughbred Racing Associations, and Turf Publicists of America.
Racing
Loading...