He’s some kind of special greyhound.

KB’s Like A Fox (Team Record-Whistler’s Annie) from the Rader Racing Kennel broke his own super sprint track record last Friday afternoon October 23rd at Palm Beach, besting his personal best with a blistering 16.37 secs victory. As I watched his race live on the BetAmerica App, Fox took the lead as he has done so many times in his career and won easily over the Grade TA competition for his 74th career victory. 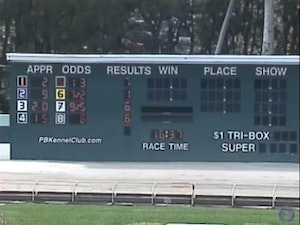 Then the Tote Board lit up.

16.37 secs flashed across the screen and all I could say is “You have to be kidding me.” Not that the Fox wasn’t capable of this record. At 4 years old though, greyhounds are usually on the backstretch of their careers. Not for Foxy. The two time Track Champion looks to be getting even better and proved it again on this day by besting his previous record by just 0.01 secs.

This record is special for many different reasons, but to me it solidifies that Like A Fox is the best super sprinter ever in the history of the sport. For two seasons, Fox has had to share this record with former Kennel mate Bae Sang, who was an outstanding Stakes winner at Southland. Sang also had massive success at The Palm Beach Kennel Club before retiring last season. With the record, the ridiculous 74 career wins plus the two straight Championships, the Fox stands all alone now. 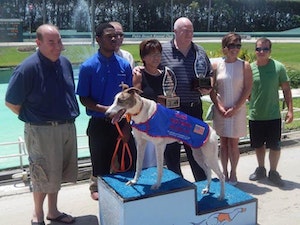 I asked Kennel owner Norm Rader about Kb’s Like A Fox and the success that he has had. Norm said, “You don’t see many or any track records broken by dogs over 4 years old. He’s like the energizer bunny, he keeps going and going and going.”

Track Announcer “FasTrak” Dale Simons who called the race on this historic Friday said on The Backstretch Show on 95.9 The Palm that KBLF was very inspired by having him on the mic that day and now stands alone as the super sprint record champion.

So what’s next for The Fantastic Mr. Fox? More history on the horizon without a doubt. He now is only 11 wins away from tying the all-time wins record at Palm Beach held by the one of the greatest racers ever in Pat C Rendezvous, who has the record with 85 set back in 1996. Fox can also become the first three time Track Champion in the history of the "The Beach" if he can continue his winning ways the rest of the way. As social media and coverage of the sport continues on the upswing, the hype for Fox’s races will only get bigger. 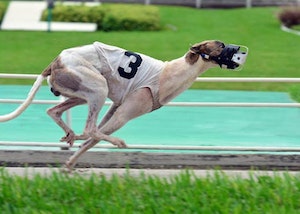 No matter what happens the rest of this season, it will be an historic ride watching this greyhound work. A Walk of Fame Star at Palm Beach should certainly await him after all is said and done.

What does the Fox say?