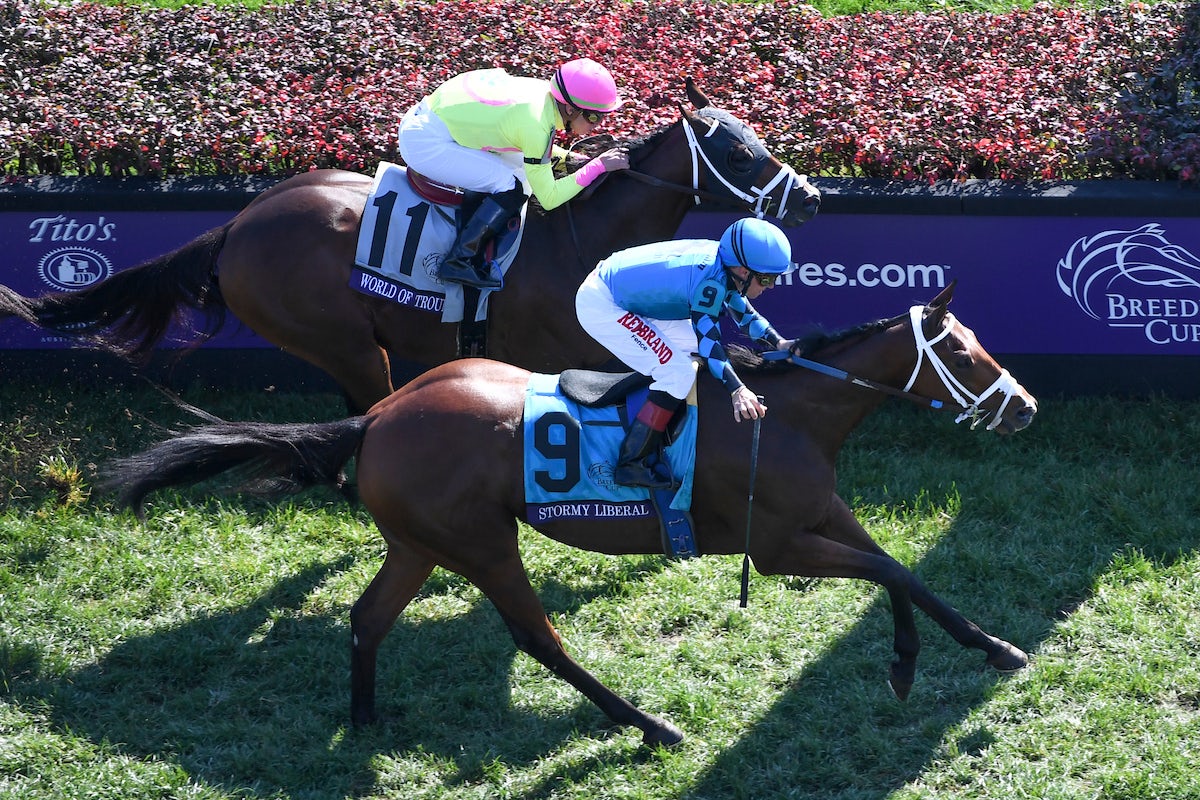 With the recent confirmation that the 2019 Breeders’ Cup Turf Sprint (G1) at Santa Anita will be conducted over five furlongs in distance, we can finally start formulating opinions on the top contenders for this prestigious year-end race.

Previous uncertainty surrounding the distance of the race made it difficult to analyze and rank the top contenders. Would the race be held at about 6 1/2 furlongs over Santa Anita’s downhill turf course? Or, with the downhill sprints on hiatus, would the race by shortened to five furlongs?

The two configurations favor vastly different types of horse, so it’s good to finally have certainty regarding the distance of the race. Now who are the top contenders to successfully negotiate the shortened distance at Santa Anita? Here’s how I view the Turf Sprint division. The runner-up in the 2018 Breeders’ Cup Turf Sprint, World of Trouble has gone undefeated in five starts since then, most notably a win in a fast and high quality renewal of the Jaipur Invitational (G1). A pure speedster, World of Trouble is the clear leader of the Turf Sprint division and will be strictly the horse to beat if he maintains his form through November. Want to play the “horse for the course” angle in the Turf Sprint? Look no further than Eddie Haskell, who has compiled an extraordinary 11-8-1-2 record sprinting five furlongs on turf. Three of those victories have come at Santa Anita in 2019, including back-to-back stakes wins in the Daytona Stakes (G3) and Siren Lure Stakes, plus a score over Stormy Liberal (see below) in an allowance race. Eddie Haskell is fast, effective and a major player in the Turf Sprint division. The two-time defending winner of the Breeders' Cup Turf Sprint, Stormy Liberal hasn’t run since he finished third in the March 30 Al Quoz Sprint (G1) in Dubai, but he recently returned to the work tab at San Luis Rey Training Center and should be back in action this fall. Although Imprimis never seriously threatened in the King’s Stand Stakes (G1) at , his form in North America this season has been strong. A victory in the Shakertown Stakes (G2) at Keeneland is his main accomplishment to date, but he also won the five-furlong Silks Run Stakes at Gulfstream with a massive 109 Beyer, the highest assigned to any turf race so far this year. Runner-up by a nose in the 2016 Breeders’ Cup Turf Sprint, Om has found new life since he was transferred to the care of trainer Peter Miller for 2019. After a game second behind World of Trouble in the Jaipur, Om defeating the rising sprinter Totally Boss in a 5 1/2-furlong allowance race at Churchill Downs. Look for Om to jump back into stakes company in the near future. This seven-time graded stakes winner might be 8 years old, but he’s also 3-for-3 this season. He most notably cruised to an effortless 4 1/4-length victory in the five-furlong Parx Dash Stakes (G3). He’s competed three times in the Breeders’ Cup Turf Sprint and finished third in 2016, but his form in 2019 suggests he still has the speed to compete against the best. With four straight victories under his belt, including a late-running win in the six-furlong Highlander Stakes (G1) at Woodbine, this 4-year-old gelding has burst onto the Turf Sprint scene in a big way. Unlike some of his key division rivals, Wet Your Whistle has yet to win going as short as five furlongs. A veteran of 35 starts and a winner of five stakes races at four different tracks, Extravagant Kid is talented and consistent—he hasn’t missed the trifecta in his last nine starts. He couldn’t quite stretch his speed over six furlongs in the Highlander, where he finished second behind Wet Your Whistle, but he did prevail in the five-furlong Mighty Beau Stakes at Churchill Downs two starts back. Although Pee Wee Reese’s greatest successes have come over the downhill turf course at Santa Anita (he actually defeated Eddie Haskell in the Sensational Star Stakes over the unique course), he hasn’t been disgraced running shorter and rarely runs a bad race. After taking some time off, he recently returned to training at San Luis Rey and should hit peak form just in time for the Breeders’ Cup. Narrowly beaten by Om in a recent allowance race at Churchill Downs, Totally Boss had previously won two other allowance sprints in convincing fashion. He’s yet to win or place in a stakes race, but this 4-year-old son of Street Boss has upped his game significantly in 2019 and could be a rising star in the division.
Racing