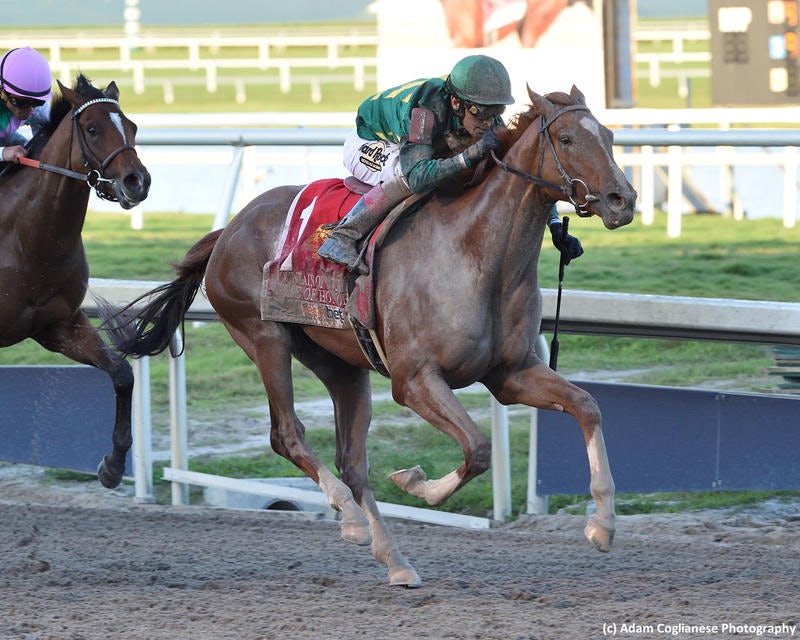 Code of Honor is back. Hidden Scroll is gone (at least temporarily). Roadster is moving up, Signalman is moving down, and that pretty much sums up the changes to my latest Kentucky Derby Top 10.

The Fountain of Youth Stakes (gr. II), won by Code of Honor in late-running fashion, was the main catalyst for change, but it was nothing compared to the action we'll see this week. No less than six Kentucky Derby prep races will be held in North America and Europe, and the top four colts on my list will all be in action.

As a result, expect to see more major changes to my list next week. In the meantime, here’s how they stack up…. In his final workout prior to Saturday’s San Felipe Stakes (gr. II), Game Winner went five furlongs in 1:00.60 on March 4, working in company with his older stablemate Dr. Dorr. Game Winner doesn’t have quite as much tactical speed as Improbable, which could put him at a slight disadvantage in the San Felipe, but this is only a starting point and Game Winner is bred to thrive once the distances get longer. Working alone, Improbable traveled five furlongs in a quick :59.80 on March 4, setting him up for a much-anticipated San Felipe showdown with Game Winner. It’s rare to have two Derby contenders of this caliber square off in a major prep race, especially when both hail from the same barn. He’s been rerouted from the San Felipe to the Gotham Stakes (gr. III) at Aqueduct, where he’ll be able to vie for Derby points without tackling two turns for the first time. He’ll also avoid knocking heads with Game Winner and Improbable, though a large and competitive field is still expected for the Gotham, so the race shouldn’t be a walkover. After rocketing a half-mile in :47 flat on March 3 at Tampa Bay Downs—the fastest of 75 morning workouts at that distance—Win Win Win looks ready to roll in the Tampa Bay Derby. That race will be a turning point for this son of Hat Trick, as we’ll finally get to see whether he can reproduce his extraordinary acceleration going two turns. I loved everything about Roadster’s comeback victory in a one-mile allowance optional claiming race at Santa Anita last week. With just four pre-race workouts under his belt, a really hard effort wouldn’t have been ideal, so I was delighted to see him work out a perfect trip stalking modest fractions of :23.75, :47.85, and 1:13.16. Even better, he took command easily in the homestretch and won without much urging by 2 ½ lengths while accelerating the final two furlongs in :12.26 and :12.11 seconds, earning a 91 Beyer speed figure. This was a big effort from a colt that hadn’t run since September due to quarter cracks and surgery to correct a breathing issue. On March 2, he returned to the work tab for the first time since the Risen Star, breezing an easy half-mile in :50.20 at Fair Grounds. If he wins the March 23 Louisiana Derby (gr. II), he’ll join International Star (2015) and Friesan Fire (2009) as recent runners to sweep all three of the Kentucky Derby prep races at Fair Grounds. A destructive pace duel surely contributed to Code of Honor’s victory in the Fountain of Youth Stakes (gr. II), but take note, he raced significantly closer to the early pace than runner-up Bourbon War and made a big move around the far turn to reach contention, so in my opinion he ran a much better race than the late-charging runner-up. This was a huge rebound off Code of Honor's fourth-place finish in the Mucho Macho Man Stakes two months ago, so trainer Shug McGaughey seems to have this stoutly-bred colt back on the right track. He’s aiming for the March 24 Sunland Derby (gr. III), which seems like a perfect spot since it will give him a chance to test his ability on dirt without going up against established stars in the Santa Anita Derby. I’m inclined to just draw a line through his seventh-place finish in the Fountain of Youth, an even effort that saw him finish seven lengths behind Code of Honor. That race had the look of a prep, and Signalman is hardly the first classy youngster to misfire in a Florida prep race. In addition, trainer Kenny McPeek told TVG that Signalman lost a shoe during the race. Taking all of this together, I wouldn’t count Signalman out of the Derby picture just yet. If he returns to Kentucky for the Blue Grass Stakes (gr. II) at Keeneland, a track where he finished second in the Breeders’ Futurity (gr. I) last fall, I think we’ll see a much-improved effort. Worked a half-mile in :47.60 on February 28 at Santa Anita, and if he keeps up his current pattern of one workout every eight days, we’ll see him turn in his final pre-Rebel Stakes breeze on March 8. It’s hard to get a line on Mucho Gusto because he was handled quite easily by Improbable in the Los Alamitos Futurity (gr. I), but for all we know Improbable could be a superstar, and Mucho Gusto seemed to take a nice step forward when employing rating tactics in the Robert B. Lewis Stakes (gr. III) last month.
Racing