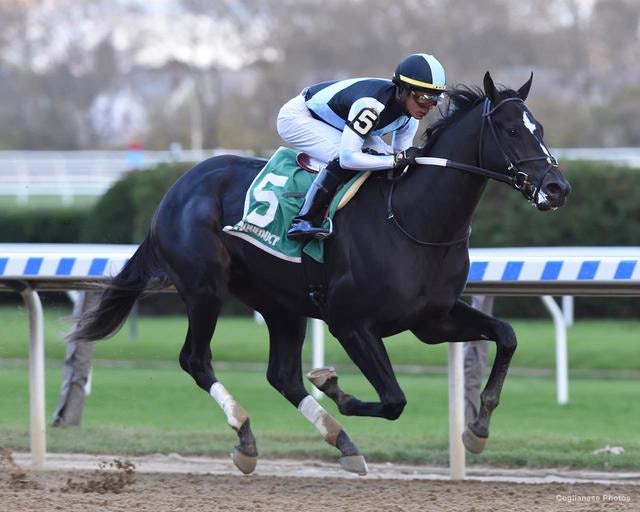 No matter how you slice it, Independence Hall is a talented prospect.

He officially joined the Road to the Kentucky Derby with his dominant triumph in the one-mile Jerome Stakes on New Year’s Day at Aqueduct, though he already had racing fans abuzz with his promising juvenile performances.

Talent isn’t a question mark for Independence Hall. The bigger concerns are his pedigree and his mental mindset toward racing, two factors causing handicappers to wonder whether Independence Hall can handle the distance and chaos of the 1 1/4-mile Kentucky Derby.

Trained by Michael Trombetta and owned by the partnership of Eclipse Thoroughbred Partners, Twin Creeks Racing Stables, Kathleen Verratti and Robert Verratti, Independence Hall has shown potential from the start. He debuted in a seven-furlong sprint at Parx Racing, and despite a slow break, the colt rallied powerfully when called upon to win by 4 3/4 lengths.

Independence Hall was even more dominant in the one-mile Nashua Stakes (G3) at Aqueduct, where he tracked the pace. seized command and pulled away down the stretch to win by 12 1/4 lengths. Even though he drifted in and out down the lane, Independence Hall managed to clock the final quarter-mile in :24.42 and record a final time of 1:34.66, good for an eye-catching 101 Brisnet speed rating.

But Independence Hall’s antics came to the forefront again in the Jerome Stakes. As in his debut, Independence Hall broke sluggishly from the starting gate and briefly raced in last place before jockey Jose Ortiz steered him to the outside and sent him up to vie for the lead. From there Independence Hall took command easily enough around the far turn, but he showed his greenness again when he shied in response to the whip in the homestretch.

On the bright side Independence Hall finished fast down the homestretch and sprinted the final quarter in :24.73 to win by four lengths. He might be a work in progress from a mental standpoint, but you won’t find anyone questioning Independence Hall’s talent. If he learns to break cleanly and maintain a straight course, he’ll develop into an even more formidable racehorse.

Then it’s just a question of whether Independence Hall has the pedigree to handle classic distances. Certainly his fast finishes in the Nashua and Jerome suggest he has untapped stamina reserves, and at first glance his pedigree looks solid enough—sire Constitution and damsire Cape Town both won the 1 1/8-mile Florida Derby (G1).

But Constitution is a young stallion, whose foals are still unproven over long distances, and the average winning distance of Cape Town’s foals is just 6.6 furlongs, which suggests he tends to pass on speed more than stamina.

There’s a lot to like about Independence Hall, but in order to defeat 19 rivals on the first Saturday in May, he’ll have to improve his mental game and learn how to best respond to the cues of his rider. A clean, relaxed run—free of slow starts and homestretch antics—will give him the best chance to handle the Derby’s testing distance.