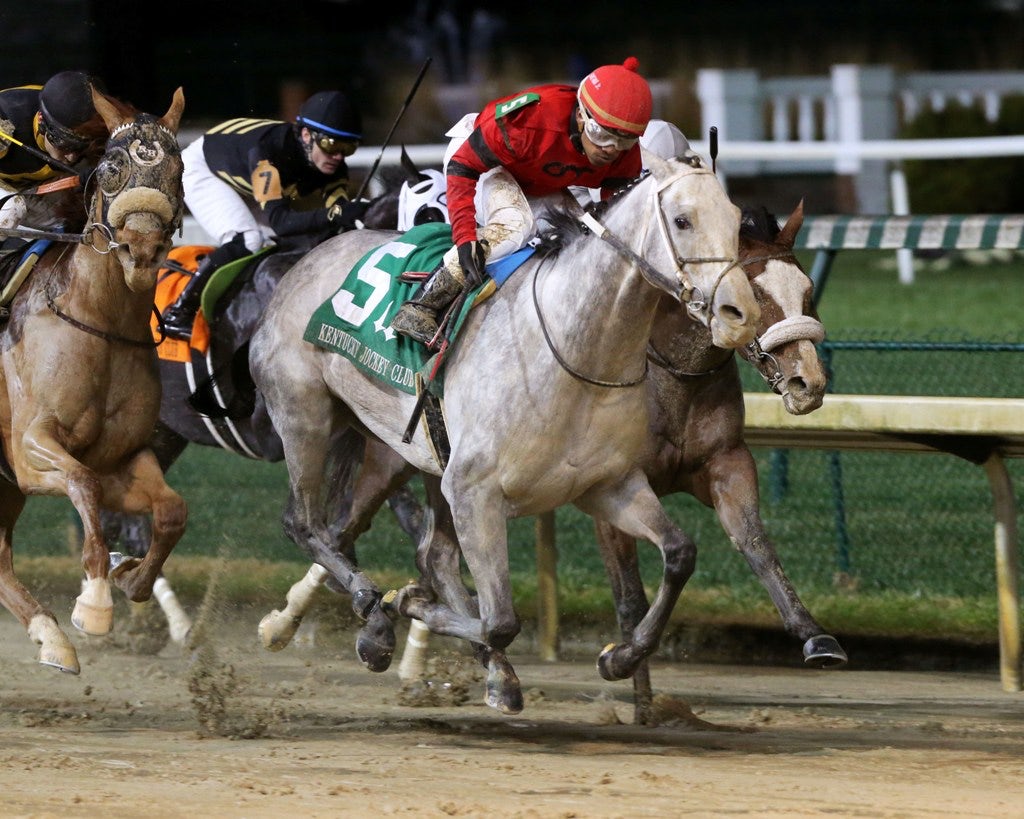 Since he's a son of the talented turf horse Declaration of War, you might assume Silver Prospector is destined for a bright future on grass.

Even Hall of Fame trainer Steve Asmussen seemed to think so at one point.

But make no mistake, Silver Prospector is a dirt horse through and through, and the exciting colt joined the Road to the Kentucky Derby with a gutsy victory in the November 30 Kentucky Jockey Club Stakes (G2) at Churchill Downs.

Silver Prospector’s triumph was a testament to his talent and determination. Over a sloppy, sealed track, the colt rallied into contention in the homestretch and gamely staved off challenges from both sides to win by three-quarters of a length. The victory secured Silver Prospector 10 qualification points toward the 2020 Kentucky Derby (G1).

Produced from the stakes-placed Tapit mare Tap Softly, Silver Prospector was purchased for $190,000 as a 2-year-old  in training by Ed and Susie Orr. Under Asmussen’s care Silver Prospector was ready to run in early summer and naturally started off on grass, because of the surface proclivity clues offered by his pedigree.

But after three uninspiring efforts on the lawn, with a distant third-place finish at Saratoga the best of the lot, Asmussen shook things up and entered Silver Prospector in a 6 1/2-furlong dirt dash at Keeneland. The result? An easy two-length victory and complete career rebirth.

With his maiden win behind him, Silver Prospector stayed on dirt and stepped up in class for the one-mile Street Sense Stakes on October 27 at Churchill Downs. After he dueled for the lead through fast fractions, he became leg weary for the run down the homestretch, but Silver Prospector showed tenacity to hang on for third place, just 1 1/2 lengths behind the winner.

A change in racing tactics for the Kentucky Jockey Club made a difference, as regular rider Ricardo Santana Jr. reserved Silver Prospector in sixth before the rider allowed the colt to rally wide in the homestretch. With a gritty finish Silver Prospector edged past acclaimed Champagne Stakes (G1) winner Tiz the Law to spring a 7-1 upset.

“He was able to relax behind horses today and was really comfortable the entire trip,” Santana said after the race. “He showed a lot of strength being able to kick that hard in the stretch.”

Having defied his pedigree to achieve success on dirt, there’s no telling what heights Silver Prospector might conquer. With a major victory at Churchill Downs under his belt, he is already one step ahead of many key rivals on the Road to the Kentucky Derby.