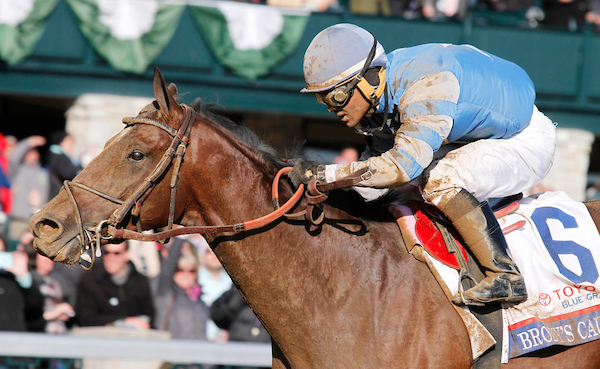 The Blue Grass Stakes has been an important lead-up to the Kentucky Derby since its first edition in 1911. That year the runner-up, Meridian, went on to win the Run for the Roses. Originally held at the Kentucky Association track in Lexington, it moved to Keeneland in 1937.

The importance of the race is marked by its status as one of the eight leading races in the Road to the Kentucky Derby series. It’s one of three major races held four weeks prior to the Derby – the others are the Wood Memorial and the Santa Anita Derby – and like those races, the first four finishers get points in the series on a 100-40-20-10 basis. It means the winner definitely gets a place in the Kentucky Derby field, and most likely the runner-up as well.

So far there have been 23 Kentucky Derby winners that have used the Blue Grass Stakes as a prep race; only the Florida Derby (24) has had more success at producing winners of the Run for the Roses. Interestingly, only 11 of the 23 won the Blue Grass, so it’s worth looking behind the winner for potential Derby prospects.

The importance of the Blue Grass as a guide to the Derby isn’t quite what it once was. Since 1996 only one Blue Grass runner, Street Sense in 2007, went on to win at Churchill Downs. However, it’s worth noting that the editions between 2007 and 2014 were all on a synthetic track, much different to the dirt track at Churchill Downs, and the return to dirt at Keeneland may make it a better Derby guide.

Previous Winners of the Blue Grass