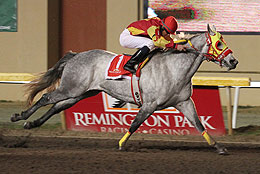 Remington Park, in Oklahoma, hosts one Road to the Kentucky Derby prep-race each season, the Springboard Mile Stakes. The Springbaord Mile holds 10-4-2-1 points for 2-year-old finishers that work towards their bid for a start in the Kentucky Derby.

The History of the Remington Springboard Mile

The most important 2-year-old race at Remington Park in Oklahoma City, the Remington Springboard Mile has become an attraction for trainers of improving juveniles with an eye on the Kentucky Derby.

That importance was recognized when the 2017 race was made a part of the Road to the Kentucky Derby series. As with most juvenile races in the series, the first four finishers gain points on a 10-4-2-1 basis.

Interestingly, the best horses to contest the race in recent years did not win the race. Caleb’s Posse, seventh in the 2010 renewal, went on the next year to win four graded stakes races, including the King’s Bishop Stakes (G1) and the Breeders’ Cup Dirt Mile (G1). Two years later, the runner-up to the 128-1 winner Texas Bling was Will Take Charge, who was named Champion 3-Year-Old Male the following year after winning the Travers Stakes (G1) and finishing a close second in the Breeders’ Cup Classic (G1).

The most recent Springboard Mile contestant to earn a Kentucky Derby spot was Suddenbreakingnews, who was nosed out of victory by Discreetness at Remington Park in 2015. The next year Suddenbreakingnews won the Southwest Stakes (G3) and finished second in the Arkansas Derby (G1) prior to a fine effort for fifth in the Kentucky Derby