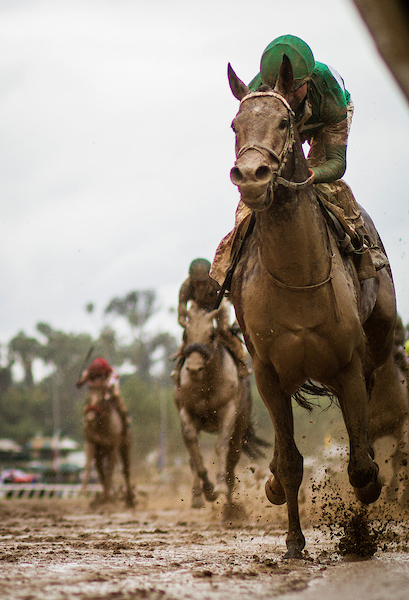 Exotic Payouts (based on $2 wagers)

The Santa Anita Derby is the most important prize among the California early 3-year-old races. With a purse as high as $1 million some years, it carries group status and it confers great value to the winner.

It’s also one of the most significant races in the Road to the Kentucky Derby series. It’s one of three major races held four weeks prior to the Derby – the others are the Blue Grass Stakes and the Wood Memorial – and the first four finishers get points in the series on a 100-40-20-10 basis. It means the winner will definitely get a place in the Kentucky Derby field, and most likely the runner-up as well.

In its early years the Santa Anita Derby wasn’t a great Kentucky Derby guide – the only contestant in its first 14 renewals to win at Churchill Downs was 36-1 longshot Gallahadion in 1940, and he was a disappointing 13th at Santa Anita.

But since then it’s been an important guide, with a further 16 runners going on to take the Kentucky Derby. Only five races have produced more Kentucky Derby winners: the Hopeful Stakes and Champagne Stakes (both 2-year-old races), the Florida Derby, Blue Grass Stakes, and Wood Memorial.

Kentucky Derby winners to come out of the Santa Anita Derby include outstanding horses such as Swaps, Majestic Prince, Affirmed, and Sunday Silence. In recent years, both I’ll Have Another (2012) and California Chrome (2014) won the Santa Anita Derby prior to winning the Run for the Roses.