Liam's Map Has That Ghostzapper Look 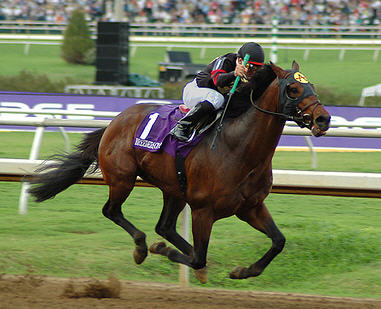 Although his connections believe that Liam's Map might be a better fit for the G1 Breeders' Cup Mile instead of the G1 Breeders' Cup Classic at 1 1/4 miles, the son of Unbridled's Song and a Trippi mare, Miss Macy Sue, left no doubt regarding his quality on Sept. 5. Liam's Map made all the running in the 1 1/8 mile G1 Woodward Stakes. He pulled away for an easy victory in the race. His Beyer Figure ended up at 114, which ties him for the fastest Beyer Figure of the year with Beholder, who ran a 114 when destroying her male competition in the Grade 1 Pacific Classic.

There is no doubt that Liam's Map's pedigree suggests that he can run in and win a mile and a quarter race. Unbridled, his grandfather, won the BC Classic in 1990. His half-brother, Will Take Charge, finished second in the BC Classic in 2013. Liam's Map's incredible ability to cruise at a fast pace on the lead before kicking it into gear in the stretch was on display in the Woodward Stakes. His connections might do well by the horse to give Liam's Map a shot in the BC Classic even though the 2015 rendition is shaping up as one of the most competitive ever.

Even though he looks quite a bit like his father, Liam's Map's style resembles one of the greatest horses to ever run in the fist decade of the 2000's, Ghostzapper. Ghostzapper's past performances in 2004 are eerily similar to Liam's Maps in 2015. Before running in the Iselin Handicap at 1 1/8 miles, Ghostzapper won the Tom Fool Handicap at 7 furlongs at Belmont Park. After he destroyed the competition in the Iselin, Ghostzapper prepped in the Woodward, where he beat Saint Liam by a neck. Ghostzapper went off at $2.50 to 1 to win the Breeders' Cup Classic in 2004. He was the favorite but he wasn't a huge favorite since Roses In May, another talented front runner, the brilliant mare Azeri, Kentucky Derby winner Funny Cide, Belmont winner Birdstone,  and the BC Classic defending champion, Pleasantly Perfect were all in the field. Ghostzapper jogged in the BC Classic. He won by a devastating 3 lengths. He also broke the record by winning the 2004 BC Classic in 1:59 flat.

Liam's Map started out this year by winning a one mile $100K optional claimer at Belmont Park. He almost held on to beat Honor Code after providing blistering fractions in the Grade 1 Whitney Stakes. Then, he romped in the Grade 1 Woodward. If Liam's Map were to run in the BC Classic, he'd likely face Triple Crown Champion American Pharoah, and the aforementioned Beholder. Both are terrific horses that could challenge Liam's Map for the lead. But, neither is likely to do so. Liam's Map could very well get an easy lead in the BC Classic. He already ran Noble Bird, a talented front runner in his own right, into the ground in the Whitney. Constitution, another talented front runner, is trained by Todd Pletcher, just like Liam's Map, and isn't likely to run in the BC Classic unless Liam's Map truly does opt for the Dirt Mile.

If Liam's Map ends up in the Dirt Mile, he's likely to face much more pace pressure early on in the race than he would in the Classic. Everything points to Private Zone, one of the fastest horses on the planet, running in the Dirt Mile instead of the BC Sprint. Nobody will be able to challenge Private Zone early in the Dirt Mile. Well, nobody except maybe a horse like Bradester who would be over matched in the Classic. Then, if all went well for Liam's Map in the Dirt Mile, if he did find a way to put away Bradester and Private Zone, how does he hold off Gimme Da Lute?  The Bob Baffert trainee is turning into a 7 furlong to a mile sprinting monster. As crazy as it sounds, Liam's Map has a better shot at wiring the field in the BC Classic then he ever would have wiring the field in the Dirt Mile. Liam's Map has never run a faster first quarter than :22.3. The first fraction in the dirt mile could end up being :21.2 or even faster than that if Private Zone is on his game.

The connections of Liam's Map shouldn't let the daunting task of winning at a classic distance bother them. Bobby Frankel didn't let it bother him with Ghostzapper and that turned out great. The fact is that Liam's Map's best chance at a victory at the 2015 Breeders' Cup rests in the BC Classic and not the Dirt Mile.
Racing
Loading...