Looking for Value in the Belmont Stakes

The tricky part is that they aren’t always the same horse. The most likely winner might be an obvious choice on paper, leading to very short odds that don’t reflect his actual odds of winning. In contrast, a horse with a smaller chance of winning might get overlooked in the wagering and offer much higher odds than they should, making the potential reward great enough to offset the decreased chance of victory.

In my opinion, Saturday’s Belmont Stakes (gr. I) at Belmont Park is a perfect example of this. The undefeated #1 Justify is the most likely winner after scoring impressive victories in the Kentucky Derby (gr. I) and Preakness Stakes (gr. I), setting himself up for a shot at sweeping the Triple Crown. But with so much at stake and so many casual bettors expected to play Justify to win, his odds are unlikely to offer much appeal. 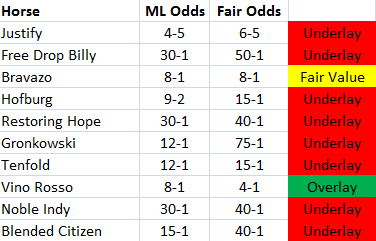 On my personal fair odds line, I have Justify listed as a 6-5 shot, meaning that at 6-5 or higher I think he would represent betting value and perhaps even be worthy of a win bet. But at lower odds—such as his 4-5 morning line price—Justify becomes a less enticing play, even if he is the most likely winner.

In contrast, I’m confident that #8 Vino Rosso is sitting on a very big run at a nice price in the Belmont Stakes. He’s shown promise throughout his career, but didn’t really put everything together until winning the Wood Memorial Stakes (gr. II) two starts back with a big late run.

Vino Rosso never really fired when finishing ninth in the Kentucky Derby, but I’ll draw a line through that effort since he raced very wide over a track that was favoring inside runners; in addition, he may not have cared for the sloppy track. With his pedigree (by Curlin out of a Street Cry mare), I’ve had Vino Rosso pegged as a prime Belmont Stakes candidate for months, and trainer Todd Pletcher certainly knows how to train a horse for this race—30% of the top-three finishers in the Belmont since 2006 has been trained by Pletcher, who has won the race three times.

Taking all of these positives together, I rate Vino Rosso as fair value at 4-1 or higher, so based on his 8-1 morning line odds he has the potential to be a significant underlay. He might not be as likely to win as Justify, but he might offer the best wagering value.

So in betting the Belmont Stakes, my plan is to strongly focus on Justify and Vino Rosso and require them both to finish in the top three in order to hit my bets. My clear third choice is the Preakness Stakes runner-up #3 Bravazo, a well-bred colt who is in great form for trainer D. Wayne Lukas, while I’ll also include #7 Tenfold, who finished a game third in the Preakness while receiving a slightly better setup than Bravazo.

#4 Hofburg is the second choice on the morning line at 9-2 based on a seventh-place finish in the Kentucky Derby, in which he endured a traffic-filled run around the far turn before rallying late once in the clear. However, I wonder if his late run in the Derby may have been enhanced by passing tiring runners once the race was essentially over, a move that doesn’t offer translate to Belmont Stakes success—think back to similar runners such as Ice Box (2010), Will Take Charge (2013), and Materiality (2013). I wouldn’t be surprised if Hofburg runs well in the Belmont Stakes, but at 9-2, I view him as a significant underlay in the wagering and will lean against him except on a couple of superfecta tickets.

Here’s how I would play the race: