A group of talented juveniles will take center stage Sunday night at Los Alamitos Race Course when the Cypress, California hosts 11 trials for the $428,400 Kindergarten Futurity. The Grade 2 futurity has its first running in 1955 and has produced some exceptional champions.

Last year, EG High Desert Farms’ won the Kindergarten with Walk Thru Crystal, a talented filly who set the fastest qualifying time in trials.  Trained by Yanet Rodriguez and ridden by her husband,  Alejandro Luna, Walk Thru Crystal won the 300 yard test in gate-to-wire fashion. Last year's purse was $294,500; the purse for the 2016 edition of the stakes is the second richest in the history of the race. 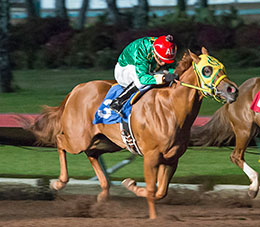 Walk Thru Crystal, with Alejandro Luna in the irons, won the 2015 Kindergarten Futurity at Los Alamitos

EG High Desert Farms has another well-bred filly, Lupita, who is entered in the ninth trial of the evening.  She broke her maiden earlier this month for trainer Rodrigue, who will give  a leg up to rider Jesus Rios Ayala.

Trainer Paul Jones has won the Kindergarten twice, and has several notable 2-year-olds entered in Sunday's trials. Red And Ready won her debut on April 17 and will break from post position nine with Roberto C. Hernandez in the irons, in the fifth trial on the night. Jones will also saddle Fooseability, and Thats A Good Reason; both won at first asking. So did Better Bet On Me, bred by Vessels Stallion Farm, who lived up to her nice work tab when she broke her maiden on April 2.

Handicapping the futurities can be a challenge, as many of the entrants are just beginning their racing careers and don't have extensive past performance information. That's why knowledge of top 2-year-old sires will pay big dividends in handicapping these races. The American Quarter Horse Association (AQHA) updates the lists of leading sires of racehorses, by the wins of their offspring as well as money earned.  Check it out on aqha.org.

Los Alamitos will begin the Sunday card at 6:45 p.m. The ten fastest qualifiers will return on Sunday, May 15 for the final.
Racing
Loading...