Three Quarter Horse stakes will kick off the Louisiana Champions Day program Saturday, December 10 at Fair Grounds in New Orleans. Each have full fields and will get the festivities off to an exciting start.

Jockey Antonio Alberto has fond memories of last year’s Louisiana Champions Day. He scored a major upset aboard 30-1 Jet Black Zoomer in the $100,0000 Louisiana Champions Day Juvenile. The son of Jet Black Patriot, trained by Kelli Smith had just broken his maiden and was dismissed by the betting public. However, Alberto, who had moved his tack to Louisiana from California had seen the improvement in morning works and knew his mount was sitting on a big performance. 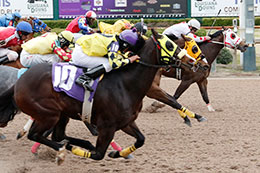 "He’s a very playful horse; full of himself and last year still had no idea what he was doing!”, said Alberto. “It was a big win and meant a lot to me.”

The 30-year-old rider hopes he will have another banner showing at Fair Grounds on Saturday as he rides in each of the three Quarter Horse stakes. He will reunite with Jet Black Zoomer in the Louisiana Champions Day Derby, facing 11 rivals, including Jessa Louisiana Zoom, Telarosa and Jet Black Rogue. His mount in the $100,000 Louisiana Champions Day Classic is Heza Bell Perry, who has run well in New Orleans, but must face a tough field, including defending champion, Open Me a Corona.  In the 350-yard Louisiana Champions Day Juvenile, Alberto will ride Shatto Stoli, who was very impressive last month winning the LQHBA Juvenile Invitational at Evangeline Downs.

Alberto, who was born and raised in southern California, has been riding in Louisiana for four years and acknowledges that the jockey colony is one of the most competitive in the country. Veteran riders Gilbert Ortiz, John Hamilton, Joe Badilla, Jr. and Alfonso Lujan are joined by David Alvarez, Damian Martinez and Raul Ramirez, Jr., to name just a few of the top jockeys.

“The competition just pushes me to work harder and ride smarter,” said Alberto. “These are all great guys, who try to help everyone out. It’s a very united colony.”

Saturday’s Louisiana Champions Day action gets underway at 12:30 pm (CT). Following the three Quarter Horse stakes, it will be Louisiana-bred Thoroughbreds showcasing their talent. Should be an outstanding day of racing!
Racing
Loading...