Delta Downs will close out its 2016 American Quarter Horse season on Saturday, July 9 with an exciting edition of Louisiana Showcase Night. The 10-race card will featured the richest race in track history for the Quarter Horse breed dating back to 1973 when the Vinton, Louisiana venue first opened its doors.

Trials for the $690,295 Lee Berwick Futurity (RG1) were held on June 18  and Louisiana Jewels, an undefeated daughter of Jess Louisiana Blue, set the fastest clocking of 15 trials, covering 350 yards in 17.733 seconds. The Michael Taylor trainee won the $298,000 Louisiana Lassie Futurity (RG2) on May 20 and will try to follow in the footsteps of last year's Lee Berwick champion, Jessa Louisiana Zoom.  She won the Lassie and followed that up with a victory in the Lee Berwick. 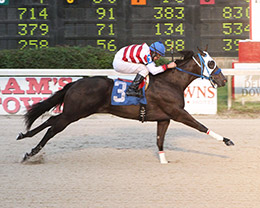 Other notable starters in Saturday’s season finale include Rdd Lajollanfastdash, who took the $273,000 Mardi Gras Futurity (RG2) back in March and comes into Saturday’s showdown as the second fastest qualifier; Tellem Im Pumped, who is also condition by 2015 Delta Downs leading trainer Taylor; and First Prize Bourbon, who enters the race as the fifth fastest qualifier for trainer Kenneth L. Roberts, Sr, who is trying to win his seventh leading trainer title at Delta Downs since 2002.

The second richest race on Saturday will be the $244,430 Delta Downs Derby (RG2) for 3-year-olds who qualified back on June 17. The fastest qualifier for the 400-yard race was Jessa Louisiana Zoom, trained by Kenneth L. Roberts, Sr. He will also saddle stakes winner Telarosa and the Renaissance Man in the 400 yard dash.

In addition, 2015 AQHA Champion Stallion Open Me A Corona will run in the $100,000 Louisiana Classic (RG2) which is set as the sixth race of the evening. Owned by Tommy Hays and Charles Forbes Jr. and trained by Bobby Martinez, Open Me A Corona has won 13 of his 17 starts. Leading Delta Downs rider David Alvarez will pilot the multiple-graded stakes champion, who is nearing the $800,000 mark in career earnings. 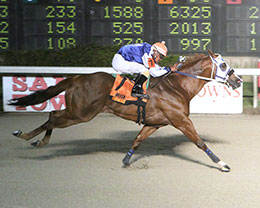 Post time for Saturday's Louisiana Showcase Night is 6:15 pm (CT).  The card  is devoted to Louisiana-bred Quarter Horse and will include eight stakes races and total purse money of $1,3 million. The first stake, the $50,000 Live Oak will run as race 2 with the Lee Berwick Futurity set as the nightcap.