Moonist, one of the top older Quarter Horses in the country, is nothing short of a win machine! Owned by Ron Hartley and trained by John Cooper, the California-bred was honored as AQHA 2014 champion 3-year-old gelding and is having a highly successful 4-year-old season.

With his victory in the $100,000 Go Man Go Handicap (G1) on September 20, Moonist is now a 10-time stakes winner at Los Alamitos Race Course. Ridden by his regular pilot, Cesar De Alba, Moonist not only captured another graded stakes, he earned a berth into the prestigious $600,000 Champion of Champions. That stakes is held in December at Los Alamitos and the winner will be a prime candidate for AQHA world champion.

Bred by Vessels Stallion Farm in Bonsall, California, the son of Separatist, has won 19 of 28 starts and amassed earnings of $643,694. Last year, Moonist won a record four Derbies (races exclusively for 3-year-old Quarter Horses). Already in 2015, he has won six of his eight starts, including the $100,000 Spencer Childers California Breeders Championship Handicap two months ago. 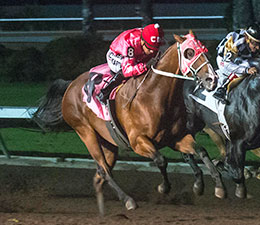 Based on his exceptional performance this year, Moonist currently standings third in the AQHA Racing-Horseplayernow.com National Poll for older horses. Make sure you catch him in action in his next start. He is speedy, powerful and tremendously exciting to watch!
Racing
Loading...