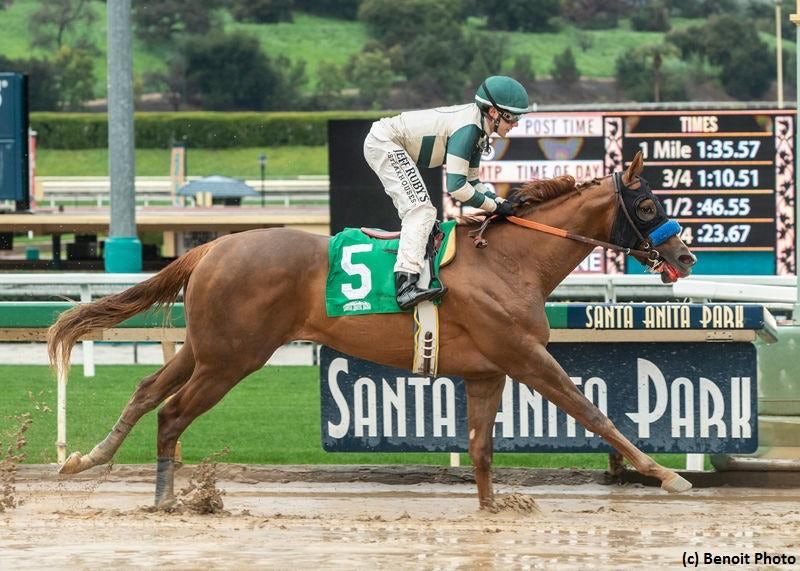 Everyone knows that Mucho Gusto is fast, but on Saturday the son of Mucho Macho Man revealed a new dimension to his racing ability, settling off the pace before producing a strong finish to win the $150,000 Robert B. Lewis Stakes (gr. III) at Santa Anita in dominant fashion.

From there, the race was easy. Mucho Gusto bided his time as the pace picked up through a :46.55 half-mile, moved strongly to the front through six furlongs in 1:10.51, and pulled away with his ears up to win by 4 ¾ lengths, stopping the clock for 8.5 furlongs in 1:41.81. It was essentially just a stroll in the park.
“Every race, he [gets] better and better,” Talamo told Santa Anita publicity. “I’m glad I’ve been working him, because he’s worked better, too. He settled today like he’s been doing this a hundred times… He galloped out real strong. I don’t think distance is going to be any problem. At the three-eighths (pole), I was pretty confident. He’s a 3-year-old, but he feels like an older horse. He’s got a great mind.”

“When we bought him, he worked in the slop at Timonium and he just smoked over it… but he’s a good horse. He’s a fighter, too. If they’d have hooked him, he likes to fight. This is the time of the year when you want to start getting excited about something (on the Triple Crown trail). We’re still dreaming in Technicolor, but they have to start performing and they have to move forward from here, but it’s a fun position to be in.”

Gunmetal Gray, winner of the Sham Stakes (gr. III) at Santa Anita last month, suffered a cut to his left front hoof at some point during the race, but nevertheless rallied to finish a distant second. “He ran okay,” said jockey Mike Smith. “He was climbing a lot. He had a lot to (overcome).”

Easy Shot finished a half-length behind Gunmetal Gray in third, while the pace-setting Magnificent McCool faded to fourth. Longshot Kid Cantina sadly broke down early in the race and did not survive.

The Robert B. Lewis marked the second graded stakes win of Mucho Gusto’s career and came two months after he finished second behind stablemate Improbable in the Los Alamitos Futurity (gr. I), his lone defeat from four starts. That effort and his win in the Lewis have combined to earn Mucho Gusto 14 qualification points on the Road to the Kentucky Derby, though it’s not yet clear where the Michael Lund Peterson-owned colt will run next.

“I want to run him in spots where he’s going to be very competitive, and we have those other horses [Grade 1 winners Game Winner and Improbable], so it depends on what the other horses are doing,” explained Baffert. “Right now I’m going to nominate my horses everywhere and whoever’s doing great that week runs in that race… Let the games begin.”
Racing