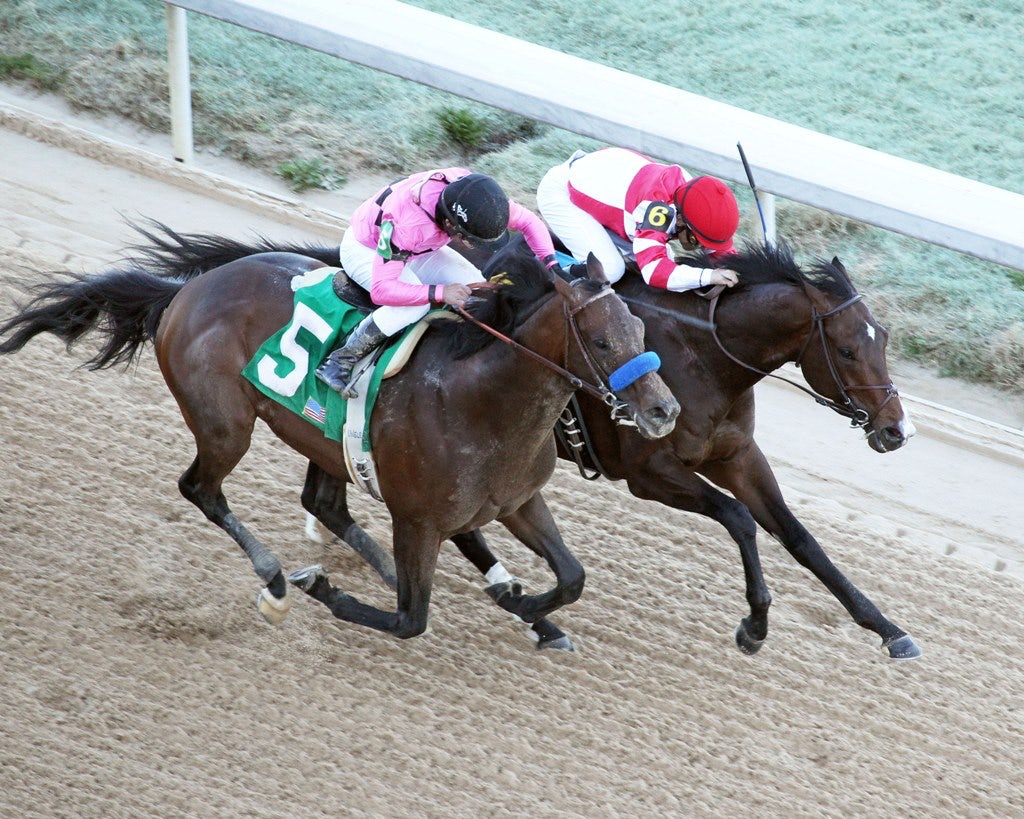 It was a sight to behold—two top-class Kentucky Derby candidates flying to the finish line of the $750,000 Rebel Stakes (gr. II) at Oaklawn Park, leaving their rivals far, far behind while battling courageously to the wire.

Both ran so gallantly, it was a shame there had to be a loser. But when they flashedacross the finish line, it was the up-and-coming Omaha Beach who held off Game Winner by the slimmest of noses to claim victory in the Road to the Kentucky Derby prep race.

A case can be made that the 1-2 favorite Game Winner, despite his defeat, might still be the better horse. Last year’s champion two-year-old male was racing for the first time since winning the Breeders’ Cup Juvenile (gr. I) on November 2, whereas Omaha Beach had broken his maiden in impressive fashion just last month. And Game Winner endured a significantly wider trip than Omaha Beach, losing ground after a slow start left him in mid-pack early on.

But to focus on the challenges facing Game Winner is to ignore the brilliance demonstrated by Omaha Beach. Stretching out in distance while making his first start against winners, Omaha Beach received a better trip in large part because he was quick into stride and secured a great position heading into the first turn. After tracking an opening quarter-mile fraction of :23.54, Omaha Beach raced to the lead through a half-mile in :47.29 and extended his advantage through six furlongs in 1:11.82.

At that point, Game Winner lengthened his stride on the far outside and made a bid to reach even terms with Omaha Beach, but turning for home, Omaha Beach cut the corner and briefly spurted away, leading by two lengths past the eighth pole. Game Winner resiliently closed the gap down the lane, but Omaha Beach dug deep under urging from jockey Mike Smith and maintained his lead in the final strides to reach the wire in 1:42.42 for 1 1/16 miles. Together, they pulled 8 ¼ lengths clear of Market King, who set the pace before holding off Gunmetal Gray for third place.
Notably, Omaha Beach’s winning time was 0.07 faster than Long Range Toddy ran while winning the first division of the Rebel Stakes, and it was also the fastest time of the afternoon on a card that included the Azeri Stakes (gr. II) for older mares and the Essex Handicap for older males.

For Omaha Beach, the Rebel Stakes marked his emergence as a top contender for the 2019 Kentucky Derby; he’s joined the leaderboard in seventh place with 37.5 points and could be poised to give trainer Richard Mandella his first Kentucky Derby starter since Action This Day and Minister Eric finished sixth and sixteenth in 2004.

For Game Winner, the Rebel was a perfect starting point for the season, and he lost nothing but the winner’s share of the purse while getting nosed out at the finish. Trained by Bob Baffert, Game Winner remains among the favorites for the Derby and will be widely expected to move forward in his next start, which will in all likelihood be the April 6 Santa Anita Derby (gr. I) at Santa Anita Park.
Racing