At the conclusion of this season at Palm Beach, you have to look back and think about what we have just witnessed.  Every track course record was broken, different winners in all of the stakes finals and the track championship chase came down to the very last day. Oh and an undefeated Grade Ladder run as well.  This was entertainment at its finest.

With these rankings, we took in a lot of things to consider.  The entire body of work over the course of the season is important, but a few of these greyhounds did spectacular things with simply one fantastic race.

Put together some of the most star studded performances of any greyhound ever this season.  Ethel broke her own middle distance course record back on December 11th, lowering it to 37.13 secs which probably will stand for quite a while.

Ethel was so lightning fast on the "Rhonda Course" that she finished with five of the six fastest splits all season by any greyhound. To top it all off, she pulled a thrilling comeback win on the last day of the season to snag a share of the Track Championship. Should be a sure fire All-American.

Was simply unreal on the super sprint course while he was here.  Renegade broke the course record three times in just a matter of weeks, concluding with the 16.22 secs burner back in March that stands alone. Renegade further cemented Rader Racing's status as the premiere super sprinting Kennel in the country.

The co-season Track Champion with Ethel consistently put together fantastic starts all season long.  Her patented box fire skills had her near the front of nearly every race she competed in.  Was a Derby & St Pats Invitational Finalist as well and was ranked nationally in the Top 25 by United Greyhound Racing earlier this season.

The Muhammad Ali of super sprinting, Kb's Like A Fox really was the greatest of all time.

The two time Track Champion broke the all time wins record at Palm Beach this season, overtaking Hall of Famer Pat C Rendezvous and concluded his career with 90 trips to the Winners Circle. Fox retired in June and most likely will have a star with his name on it coming to the Walk of Fame in front of the track in the very near future. 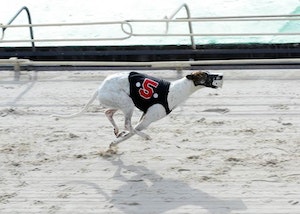 The leader of first time Kennel Championship winners B & B Racing. "Kid Dynamite" scored a dominating victory in the $50,000 St Pats Invitational and bested the best males of Palm Beach in the Fathers Day All-Star Feature.  Going into next season, Tyson has a real shot of representing his Team in the BetAmerica Daytona 550 National Championship if he continues to run well. The most powerful sprinter in all of South FLA right now.

"The Luck of the Irish" had a spectacular first season at Palm Beach, racking up 27 wins and finishing just short of grabbing a share of the Track Championship.  The future looks bright for Dublin heading into next season for the suddenly surging Douglas Kennel.

Represented Palm Beach in the National Championship race in Daytona back in January.  "Shorty" finished fourth in the country, running right with the some of the fastest greyhounds on Earth. He may make another run at greyhound glory this next season, as his last start of the season he blazed a 29.43 secs victory after an extended vacation.

Did something that many people thought was impossible.

Speeding Bullet back on July 24th became the first greyhound in Royal Palm Course history to break the 29 second plateau that sent shock waves through the racing world with his 28.92 secs victory.  One of the most unbelievable things I've ever seen. May have been a one hit wonder but that race will be remembered by greyhound fans for generations.

"Tom Terrific" put himself into the history book this season by climbing the Grade Ladder, going undefeated from Maiden to Grade A to start his career.  Nearly tied JS SpeedyPebbles for the best start in history by winning his first seven starts.  Also made the Final of the He's My Man Classic with only 14 career starts under his belt.

In what turned out to be the greatest day in Palm Beach history, Jolie broke the Marathon course record on the same day that Speeding Bullet broke the sprint record back on July 24th. Her 41.23 secs romp that day was just extraordinary.  Jolie was the first real superstar the Marathon has had in quite sometime here before transferring to Southland Park.