Another sensational month of racing has wrapped up at Palm Beach! The Puppy Stakes Final plus the season championship chases heating up made for a competitive list of the best athletes here in South Florida.

Here are our Top 10 Rankings for April at "The Beach."

It's unbelievable that this nearly 5 year old is still dominating like he does.  "The Fox" scored his 90th career victory this month and grabbed a piece of the season wins lead alongside Ethel Is Here.  Will he finish strong like last year and take home his third straight track championship will be the biggest headline here the next couple of months.

The hottest hound at Palm Beach.  Camry has made flying out of the box on the "Rhonda Course" fashionable again.  Clearly the top talent active in the 660. Camry's blazing month now has her in position for a chance at the season wins championship.

The St Pats Champ continues to be the strongest sprinter at the track.  "Kid Dyamite" is leading his Team from B & B Racing towards their first ever Kennel Championship.

Russian stunned the Puppy Stakes Tourney by taking home the $20,000 top prize last Saturday at 15-1 odds. Rader is going to need a bigger trophy shelf with all the hardware they've brought home this season.

Ethel only ran once this month, which is more than enough for her to stay in these rankings.  Look for the Derby Champ to be back racing when she returns from a well deserved beach vacation.

One of the best young prospects in the country made the Puppy Stakes Final and has one of the fastest splits on the sprint course of any greyhound this season.  "The Little Red Machine" heads to West Virginia, where success will certainly be found. 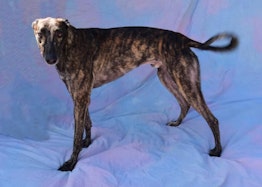 "Big Mac" made his first Stakes Final last weekend and cemented his status as Top A Grader in the month of April.  The nearly 50% career winner has a bright racing future ahead of him.

"The Luck of the Irish" has the most sprint victories of any athlete at the track this season. If he heats up in the stretch run, the wins chase could get even more interesting here.

The Usain Bolt of greyhound racing ripped off 4 wins in April in a surprise comeback for the veteran of 80 races the last two seasons.  Just shows you how deep top Kennel B & B's roster of athletes really is.

The rookie caught fire in April with 4 wins and showing ridiculous closing abilities.  Watch out for Aden in May from superstar owner Patrick Collins.