This place is never short of news stories is it?

We found out who the 31 entrants to the $50,000 James W Paul 3/8ths Mile Derby will be coming up on Wednesday but the biggest news came on Sunday as one of Palm Beach's greatest athletes hung up her racing jersey.

Here are the top stories we saw from the previous week at "The Beach."

In what came as a surprise to her fans around the world, the "Living Legend" Ethel Is Here from the Janie Carroll Kennel announced her retirement on Sunday, just days before the Derby was to commence.  With a Derby Championship, a Track Championship and a middle distance course record on her resume, Ethel will go down as one of the greatest greyhounds South Florida has ever seen.

We'll have much more on this story throughout the week and a write up about Ethel next weekend as we celebrate the outstanding career she had over the past three seasons.  Look for a celebration and retirement ceremony to be announced this week from Palm Beach officials. 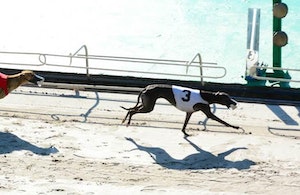 With Wednesday's first round of the 86th running of the Derby, Sunday was a day of anticipation waiting for the programs to come out.  After Ethel retired earlier in the day, that now leaves only 31 entries to one of the most sought after titles in the sport of greyhound racing.

We'll have our preview out on Wednesday morning, with analysis of the favorites and others to watch out for.  New He's My Man Champ Janice Dean will certainly be one of our featured hounds all tournament long to follow.

Douglas Kennel The First To 500 Wins

They've been in front pretty much since the beginning and they haven't let off the gas since.

The Douglas Kennel picked up their 500th team win of the season this week and also have widened their lead in the team championship chase to just over 60 wins.  With superstars like Whirlin Toodlelu (pictured) and the Barts Bros (BartsRockTheBoat & Barts Big Bang) Douglas could be celebrating their first championship since 1990 if they can continue their consistent winning ways.  They will be tough to catch.

Pooches Right Yet Again For The Super Bowl!

Last Saturday in the annual Pooch Predictor Race, the greyhounds spoke when the New England Patriots representative steamrolled the Atlanta Falcons signaling that Tom Brady was going to get a 5th Super Bowl Ring.  That's exactly what happened Sunday night as the Patriots had the biggest comeback in NFL playoff history with the victory 34-28. The Falcons just seemed to "sit in the box" about mid way through the 3rd quarter.

The greyhounds at Palm Beach have now correctly predicted the outcome of the Super Bowl 15 of the past 21 years (71%)  No matter what kind of predicting you are in to, that is straight getting it done.

I've said for a long time that the Marathon (738 yard) race is one of my favorites to watch and it lived up to the billing Saturday night.

#2 Botany Bay from Ryan Racing came from behind by at least 15 lengths early to get the win by just a nose that had fans buzzing that saw the replay on our social media feeds.  Possibly the best race of the year so far.

If you missed it, here's a link to the replay that is well worth the watch: