Only two weeks left in this fantastic season at Palm Beach! Clifford finally got his blanket this week, Toodles sparked a worldwide celebration and the greyhounds this month are all about goofy behavior on the track.

Lets take a look back at the top stories we saw from the previous 7 days at "The Beach."

Big Red Finally Has His Day In Victory Lane

It's been a long time coming, but he wouldn't be denied this time around.

Big Red Dog from Rader Racing ended his drought of winning the big one, after he romped to a 29.80 secs win in the Fathers Day showdown on Sunday. The race featured eight of the top male sprinters that Palm Beach had to offer in one of the more competitive fields we have seen for this race.

"Clifford" has been sensational this season, with three stakes finals and 24 victories, but had been shut out from having a blanket that he mightily deserved.

Cliff from the Rhythmless- Kb's La Bella litter has been one of the best fire breakers in the country since arriving to South FLA just over a year ago. With all the success he has had in his career, winning a marquee race was the one thing missing from his resume.  If you didn't know, greyhounds are obsessed with victory blankets and I'm sure Clifford will enjoy the last blanket given out for the 2016-2017 season here.

You knew after she ran a clunker in her last start that she was going to rip one off next time out and she didn't disappoint.

Whirlin Toodlelu from the Douglas Kennel finished a stunning 7th in her previous run but was back to being amazing last Friday, as she came from behind for her 23rd win on the season.

Toodles has put together a supreme season like Clifford, making two stakes finals and just missing by literally a whisker for the St Pats Championship last March.  A social media darling around the globe, anything mentioned on our feeds about this superstar instantly becomes the main topic of conversation.

Look for our article this week asking the big question....who has been the best sprinter this season at Palm Beach?  Toodles and Clifford are certainly in the discussion, but are there others that should be considered as well? 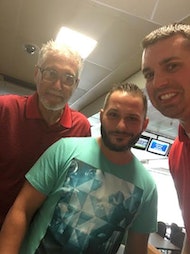 A greyhound/horse discussion show on the FM dial every week?  Most pundits probably scoffed at the idea when it first came out.  But here it is the little show that could still rocking it out every Friday night for the world to listen to.

The Backstretch Show broadcast live every week on 95.9 FM The Palm right in the upstairs Poker Room celebrated 7 glorious years on the radio last Friday night.  The dream of host Mike Balsamo and his buddy former horse trainer Benny The Boot has amassed a cult like following for its authentic content and willingness to have fun.

I became a regular contributor to this show two and a half years ago when I announced for the first time ever on live radio that Storm Control would be representing the Palm Beach in our National Championship. It's a thrill to be on each and every week and promoting the sport and our company to the listeners.

"It's been a long time!" Balsamo quoted to us about the show longevity. "I enjoy it though, so surely not like work."

What makes this show great? The characters that have joined us over the years.  From track announcers and handicappers at Palm Beach, to great interviews from owners and trainers around the country, you really never know what to expect when the clock strikes 6:06 PM on Friday nights.

Happy anniversary to a fantastic show and thank you for letting us be a part of it with you!

You know how kids get at the end of the school year?  Squirrely and acting silly knowing summer break is right on the horizon.  Well I think the greyhounds have that same type of behavior going on right now at Palm Beach.

Last week, we highlighted in Saturday's evening race that one greyhound decided to show his backside for the cameras to see in the starting box..  Well this last Saturday in the 2nd, Lou Dobbs from the Brindle Kennel decided it was time for a naked run.  Dobbs in the starting box stripped off his 3 blanket and rushed out with no worries at all.

During the race, track announcer Mike Jameson even told the crowd that "Lou Dobbs was streaking today!"

Track officials still have no idea how the greyhounds turn in the box or strip off their racing jerseys like they have been.  Maybe we need a camera put in there to keep an eye on them.

What kind of shenanigans will the greyhounds come up with next week?  Tune in to see!