The ending to the story is nearly complete.

With the conclusion to the 2016-2017 season just on the horizon, we've been looking back at the many great moments we saw this past year on our social media feeds.  We also had a superstar retire and a jammed packed July 4th card is one you will not want to miss coming up.  I also posed the question whether a USA hound could ever win an international tournament.

Here's the top stories we saw from this past week at "The Beach."

Smokey Hangs Up His Jersey

After a brilliant career that included 211 starts and 53 victories, Smokey decided it was time.

PJ Smoke Em Out from the Agganis Kennel put his racing spikes in the closest for good this week, as his team announced the retirement on Thursday.  His longtime trainer Bob Dawson couldn't say enough good things about his favorite hound.

"Smokey, love this boy," Dawson said on his Facebook page. "No more races for him, officially retired.  He's going home to be a daddy.  I will miss him. Ran against the best for years.  He was all heart."

The sheer longevity of Smokey's career is what people will remember.  He ran in four different racing seasons against Palm Beach's top hounds.  Even as he approached 5 years old this summer, he was still going strong, mostly in A Grade and occasionally dropping down to at worst B. Track Announcer Mike Jameson always liked to say that Smokey was "gray in the face, but he can still race" referring to the all gray look that Smokey now has in his older years.

We should have known Smoke Em Out was going to be great as soon as he arrived.  With that patented slashing break to the rail that put fear into any greyhound to the left of him, he won his first five races to start his career.  He also won the 2014 Memorial Day showdown and several other Feature Races.  Combine that with a handful of Stakes Finals, Smokey did his owner and Kennel proud.

Congrats to Smokey and his entire team on a wonderful career full of excitement and consistency that you very rarely see in this sport.

July 4th Is A Cant Miss

July 4th is always a special gathering at the Palm Beach Kennel Club, but this year is turned up to a whole other stratosphere.

Since all of the season awards have been decided early on, PBKC is able to honor them during this celebration.  Fraulein Morgan from the Janie Carroll Kennel will pick up the outright track championship and the Douglas Kennel will be your team champions.

PJ Smoke Em Out will also be honored with a retirement celebration.

If that wasn't enough for you, the annual Firecracker 545 will be contested in Race 10.  With so many stud sprinters going this year, this throwdown should be one that draws a lot of interest nation wide. BetAmerica will be live all week at "The Beach" covering all the events.  Check our feeds for pictures, interviews and live video. 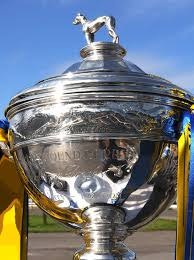 Could a USA Hound Win The Derby?

Most greyhound fans in the states are unaware that the biggest tournament in the world is being contested right now in the UK with the $220,000 English Greyhound Derby.  The best of the best in Europe have been going paw to paw the past month and are now down to the Final 6 that will be contested next Saturday at Towcester Greyhound Park.

I posed the question on my feed this week whether a US greyhound could ever win this tournament.  In the 70+ years that this tourney has been going, no US dog has ever even competed in this, let alone won it.  I found that fascinating since this is considered the holy grail of the sport and one of the richest purses in the world.

Horses travel all over the world for huge prices.  We've seen California Chrome and American Pharoah go international.  Why can't the greyhounds do it?

The favorite in this tournament is an Irish boy named Clares Rocket, who has skyrocketed to superstardom with his record setting times and also is undefeated going into Saturday's Final.

I don't think there is any question we have some of the top greyhounds in the world competing here in the states.  It would cost a bit to fly the dog over and to get them acclimated to the European scene.  But think about this....Instead of getting mediocre coverage running in the states, your greyhound could have the chance at being an international star.  All of the races are on Sky Sports Television, there is articles written everyday about the tournament in the papers and winning it puts you on a platform that is like no other. That kind of glory is a pipe dream in the US currently.  Isn't it worth a shot to be a ground breaker?

English and Irish Kennels have already stated they want a USA greyhound running for them next year in this tourney.  It would be newsworthy and put a whole new wrinkle into this competition that Europe would embrace. Which one of you owners wants to take a chance?  Contact me if interested.

Leading up to the last day of the season on June 30th, we've been showing our favorite races that we witnessed this year.  We also released our annual best of lists, highlighting the top hounds and moments.  This all culminates in our Final Top 10 Rankings that come out on July 1st!

Here's the Best Of List article if you missed it: