Welcome to June and the final month of racing this season!  The season championship remains tight heading into these final 4 weeks, while the Kennel Championship is about wrapped up.

Here's the top stories from last weeks racing action at "The Beach."

The top headline continues to be Ethel Is Here from the Janie Carroll Kennel returning to the track.  She immediately struck for victory last Wednesday, putting her all alone at the top of the standings.

Atascocita Camry helped her chances by scoring a box to wire win in Saturday's Matinee. Would love to see Palm Beach match up Ethel and Camry more often down the homestretch. Would be an amazing rivalry as they battle for this championship.

I think people will find it stunning that two time track champ Kb's Like A Fox is now a C Grader. That could help down the stretch facing competition that shouldn't be able to run with him.

Ethel has a very favorable draw coming up in Tuesday's Matinee 14th.  If she is able to go to the winners circle yet again, she may have this chase all locked up.  It should be an exciting final weeks watching how this script plays out. 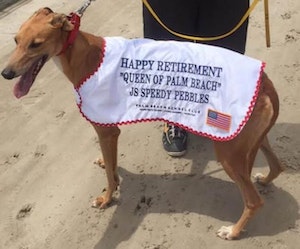 On Monday, Palm Beach and all fans of the Queen said goodbye to JS SpeedyPebbles as she heads into retirement. A fabulous video highlighting Pebbles career was played at the track, with a picture session after with her Team. Pebbles along with best friend and sister JS Froot Loops and the rest of their litter head back to owner Shannon Henry's farm in Abilene, Kansas to live the good life. 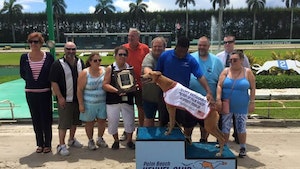 The next step is breeding, which many people will be interested to see who Henry chooses to match up with Pebbles.  Who do we like? We'll put our favorites out there in the next few weeks.

The pride of the suddenly surging Blu Too Kennel shimmied into our May Top 10 Rankings by firing a 29.17 secs victory on Tuesday, the third fastest split by any sprinter this season. Dakota followed that up with a 29.49 secs sizzler win on Saturday. This could be the next top A Grader we have to watch at "The Beach" going forward.

Along with brothers Ataree & Tarmac, "The Little Kennel That Could" is putting together a solid squad going forward into next season.

B & B Racing Looks For Their First Championship

With just under 4 weeks left in the season, the Kennel Championship chase is just about over.  With over 100 more races won then the rest of the teams at Palm Beach, B & B Racing will be celebrating their first ever championship when the awards are handed out July 4th.

With superstars like Superior Tyson (pictured) and many dogs with the Amf name, B & B has been the most consistent Team all season long. With "Top Cat" Tony Calvo leading this Team as head trainer, this is a Kennel that should be set for many more championships in the future.

All this success started with All-American Storm Control from owner Steve Schlachter joining B & B's arsenal back in 2013 and the team hasn't looked back since.  More on this story as we get closer to the end of the season.

The Return of Shorty

Fans of the BetAmerica National Championship Finalist Pat C Short Cut from the Koppe, Staats & Collins Kennel were very pleased as "Shorty" returned after a nearly three month South FLA vacation to school last Wednesday.  Still no word when Short Cut will return to regular action, but fans will certainly be checking their race programs daily to see if he is slated to start.

That's all we have for this week. We'll see you next week for the Wrap-Up!