A fantastic start to the new season at Palm Beach!  The champions from last season were given their well deserved hardware and the greatest super sprinter of all time had a course/starting box named after him.  Plus a new star is starting to emerge.

Here are the top stories from last weeks action at "The Beach." 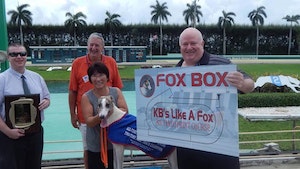 On Monday, Palm Beach and its fans gave one final goodbye to the all time wins leader Kb's Like A Fox. The 90 time super sprint winner received an amazing going away present, when the track renamed the starting box and course after the legend.  Asked what this meant to him and his team at Rader, owner Norm Rader stated that it felt tremendous and they were very proud of these honors.

So long "Foxy."  It sure was a pleasure covering your career these past few years and witnessing your domination of historic measures. 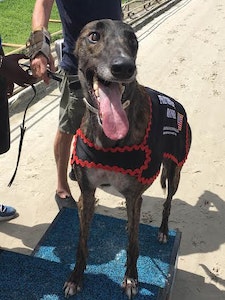 Sentinel On A Mission

He has come into this season on an absolute tear.

After taking the Firecracker 545 on Monday in the first major showdown of the new season, Sentinel from Ryan Racing put out an equally impressive performance during the Superstar Saturday Matinee.  Both fields were loaded with top South FLA talent as well. What was stunning to me were the splits...a 29.28 secs smoker Monday followed by a 29.36 secs victory in the next start. 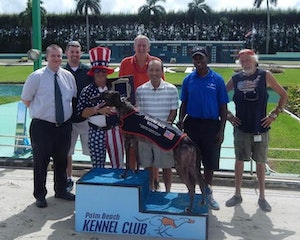 Is the just turned 2 year old puppy star ready to take his game to the elite level?  We saw flashes of it last season but right now, Sentinel and his team looked primed for a monster season at "The Beach." 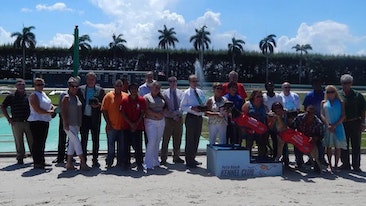 The Club put one final bow on the 2015/16 racing season by recognizing the best of the best on Saturday.  Tied at the front of the wins standings for the Track Championship was Ethel Is Here & Atascocita Camry with 28 victories. In what had to be the most crowded award picture in history here, the Janie Carroll Kennel & Suncoast Racing both brought home gold in what was a fantastic chase all year long to watch.

This should be one outstanding rivalry between the middle distance queens as we head into this new campaign. 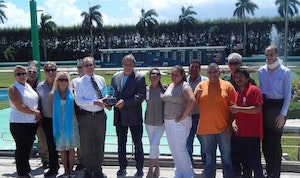 B & B Racing was honored for the first time ever as Kennel Champions after racking up 905 victories last season.  The deepest team of them all will be tough to contend with as they try to defend their new Title this year.

Congrats to all the champions this past season!

Predictions For The New Year

It's that time of year again where we put out our predictions for the new season that has just gotten underway.  Lets see if we can nail a few of these:

I probably will never let people forget that we predicted Pat C Short Cut would rep Palm Beach last year at the NC.  Shorty is a contender again this time around, but Superior Tyson from B & B Racing gets our early nod for the spot.  The 50K St Pat victor ran up 26 wins last year and looked like he was getting stronger as the season went on.  Sentinel, JustDoInMyThing, Go Big Or Go Home and Barts Dublin will also be in the running. "Kid Dynamite" Tyson heads to Daytona in January.

This is always a tough one to early predict simply because new stars emerge here every campaign, plus you have to not be worried that teams will send their top athletes to casino rich Southland Park sometime during the year long chase.

I'm going with the "Big Mac Attack" Blu Too Tarmac from the famous Blu Too Kennel to bring home this championship next June.  The puppy phenom had a 47% winning percentage, the leader among the top sprinters at Palm Beach.  You may see the most ecstatic team photo in history if kennel owner Katherine Abatti and her crew bring home a major title/Stakes victory this season.

Since we saw all four course records get smashed last year, at least one has to down this time around right? Maybe....but the splits that Craigie Renegade, Speeding Bulley, Ethel Is Here (pictured) & Atascocita Jolie put up on their record trips will be extremely difficult to top.

If I had to pick one, I'll go with the sprint record by Bullet in 28.92 secs last July.  Nobody thought any greyhound could go under 29 secs here and it happened.  Dramatic things always happen at Palm Beach and this certainly would be a shock if this record actually went down again. We'll see.

Yes...and two big reasons why.  They have been stockpiling talent on their team the last three years, compiling more starts then any other and winning at a high rate consistently.  They also for the most part keep their athletes at Palm Beach. Tyson, all the Amf hounds from owner Tom Ferris and the continuation of top owner Steve Schlachter's commitment to their team keeps B & B rolling to the winners circle this time around.

A huge thank you to everybody who made us at BetAmerica feel so welcome when we visited over the holiday weekend!  Palm Beach Kennel Club is such a first class organization and they continue to see success because of how they do business.  Keep up the outstanding work and we look forward to seeing all of you in the near future.

That's all we have for this week. We'll see you next time for the Wrap-Up!