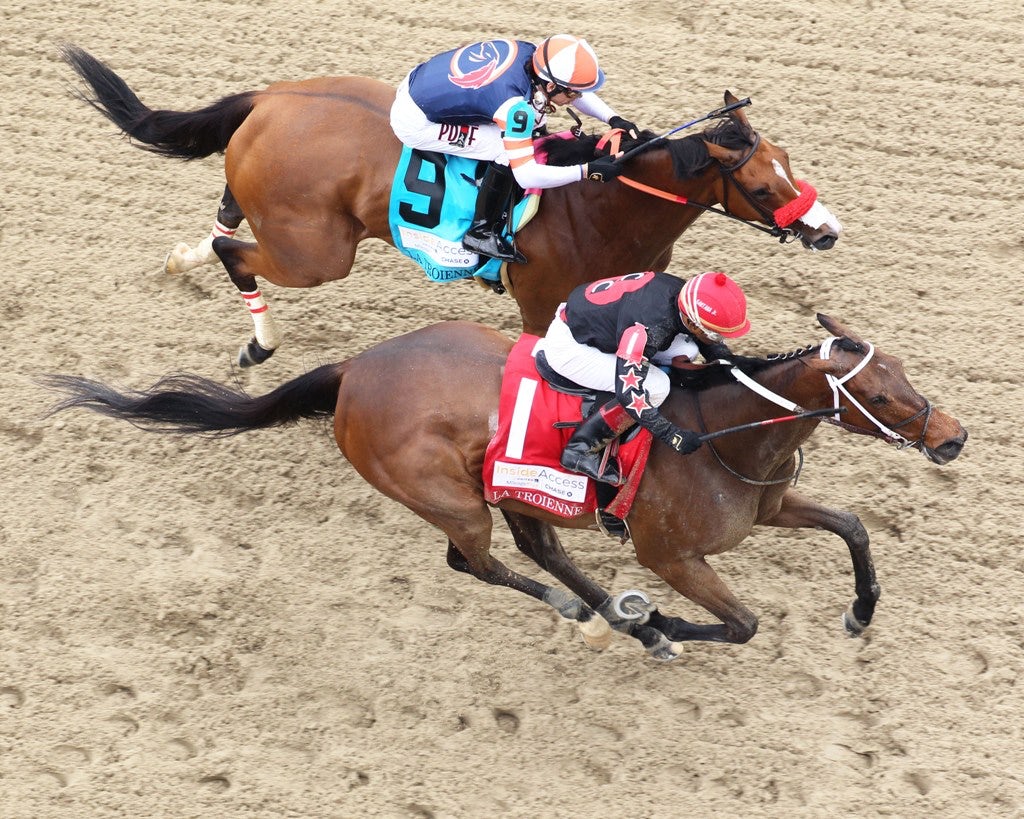 She wasn’t the favorite—three rivals started at shorter prices—but when push came to shove, She’s a Julie was indisputably the best filly in the $500,000 La Troienne Stakes (G1) on Kentucky Oaks Day at Churchill Downs.

She’s a Julie is a perfect example of a horse who needed time to mature before reaching peak form. After winning her debut as a 2-year-old at Churchill Downs, the daughter of Elusive Quality lost five straight races and wasn’t competitive in two prep events on the Road to the 2018 Kentucky Oaks. But She’s a Julie showed gradual improvement toward the end of 2018. She won the Iowa Oaks (G3) and Remington Park Oaks (G3) and placed second in the Alabama Stakes (G1).

Now the patience of her connections is paying off, and 2019 has been even more productive. Trainer chose the Bayakoa Stakes (G3) at Oaklawn Park for She’s a Julie’s 4-year-old debut, and she romped home by 2 3/4 lengths after setting the pace. Then in the La Troienne, she employed stalking tactics before unleashing a determined rally down the homestretch to challenge Grade 1 winner Secret Spice for the lead.

It briefly appeared as though Secret Spice might hold on, and she certainly tried her best to stem off She’s a Julie’s late charge, drifting outward down the lane and interfering with She’s a Julie’s momentum. But Asmussen’s filly proved resilient, battling on under urging from jockey Ricardo Santana Jr. to cross the wire a half-length in front and stop the timer for 1 1/16 miles in 1:43.58. Blue Prize and Mopotism, both graded stakes winners, rounded out the top four in a competitive field.

Considering the early fractions of the La Troienne were modest at best—:24.01, :47.92 and 1:12.05—She’s a Julie’s late surge to catch the pace-pressing Secret Spice was all the more impressive. Her effort was rewarded with a career-best 96 Beyer speed figure.

Having broken through at the Grade 1 level, and with no end to her improvement in sight, She’s a Julie is poised to challenge for division leadership this summer. Her main rival could be her own stablemate, Midnight Bisou, who is 3-for-3 in graded stakes company this year with a triumph in the Apple Blossom Handicap (G1) her signature win.

Only time will tell when or if She’s a Julie and Midnight Bisou will square off this summer, but one thing seems certain—Asmussen’s barn is loaded with talented horses this year, and the future looks bright for She’s a Julie.
Racing