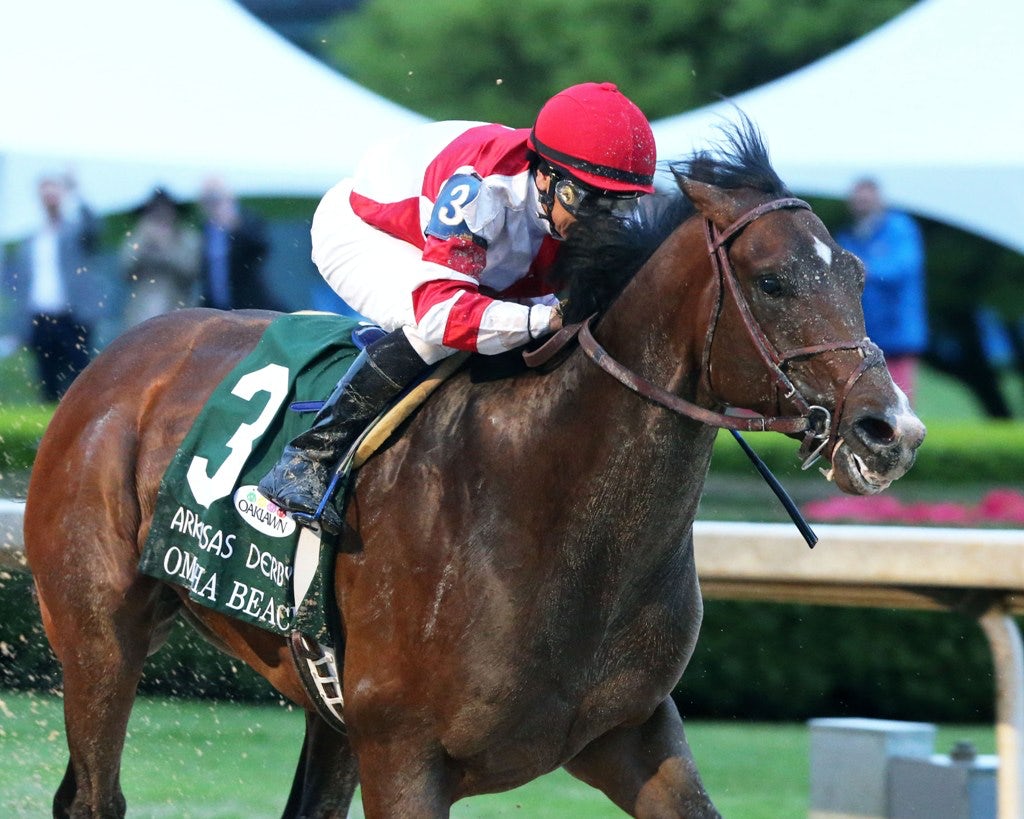 He’s fast. He’s accomplished. He’s seemingly improving with maturity. But will Omaha Beach end his career on a winning note in the on Jan. 25 at Gulfstream Park?

Gulfstream has revealed a list of 17 horses invited to compete in the 1 1/8-mile race, won in the past by Breeders’ Cup winners Arrogate, Gun Runner and City of Light. While Omaha Beach won’t bring such a decorated résumé, his triumphs in the Arkansas Derby (G1), Santa Anita Sprint Championship (G1), and Malibu (G1) have stamped him as a versatile runner with a world of talent.
A world-class performance might not be necessary to win this year’s edition of the Pegasus World Cup. While the prospective field remains in flux, many of most formidable invitees are planning to skip the race in favor of other targets, which leaves Omaha Beach a clear favorite to win his final start.

Among the expected absentees are Cigar Mile (G1) winner Maximum Security and Whitney (G1) winner McKinzie. Either of these accomplished runners could have vied for favoritism with Omaha Beach, but instead they’ll skip the Pegasus to target the inaugural $20 million Saudi Cup on Feb. 29 in Saudi Arabia.

Gift Box, winner of the 2019 Santa Anita H. (G1), will likewise skip the Pegasus in favor of the Saudi Cup or possibly a defense of his Big 'Cap title. He could be joined in Saudi Arabia by four-time graded stakes winner Mucho Gusto, who hasn’t run since he finished fourth in the Sep. 29 Oklahoma Derby (G3).

So who is left to challenge Omaha Beach? The speedy Spun to Run handed the Pegasus favorite a surprising defeat in the Breeders’ Cup Dirt Mile (G1) and will seek another upset victory at Gulfstream. Higher Power also brings Grade 1 credentials. He cruised to a decisive victory in the Pacific Classic (G1) at Del Mar last summer, while Seeking the Soul will seek to improve upon his runner-up finish in the 2019 Pegasus World Cup.

Santa Anita Derby (G1) winner Roadster, Pennsylvania Derby (G1) winner Math Wizard, and Jim Dandy (G2) winner Tax all achieved high-level victories as 3-year-olds in 2019, though they haven’t progressed quite as impressively as Omaha Beach. Roadster was no match for the Pegasus favorite in the Dec. 28 Malibu, while Math Wizard was soundly beaten in the Nov. 2 Breeders’ Cup Classic (G1) and Tax most recently weakened to finish second in the Nov. 30 Discovery (G3).

Four veteran graded stakes performers complete the prospective lineup: Diamond Oops, Mr Freeze, True Timber, and War Story. All bring positive recent form into the Pegasus, with War Story in particular looming a threat off his win in the Dec. 14 Harlan’s Holiday (G3) at Gulfstream. But none have managed to reach the winner’s circle against Grade 1 company, and both War Story and True Timber have been beaten in past editions of the Pegasus World Cup.

It seems likely Omaha Beach will go out a winner in the Pegasus World Cup to bring his career to an acclaimed conclusion. While it’s a shame he won’t stick around for a complete 4-year-old season—the way he’s progressing, his best is surely still to come—the Pegasus will give racing fans one more chance to see a star colt in action, and that’s always a good thing.
Racing