The feature at Belmont Park on Sunday is the $100,000 Wild Applause Stakes for 3-year-old fillies. There is so much respect for trainer Todd Pletcher that Angela Renee, a horse that has never run over the turf before, is the morning line favorite at 5/2. Is the Wild Applause Angela Renee's to lose? 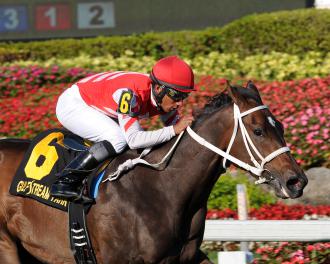 Celestine goes into this event on a 3 race win streak. She gets the services of Rajiv Maragh who rode beautifully over the turf during Friday's Belmont card. Rajiv figures to carry over that great form to Saturday. He's on one of the few horses with early foot in this.  Maragh should be able to put her right onto the hip of the 1-Lismore before taking over at the top of the stretch.

6-Partisan Politics, 4/1 - Whenever trainer Chad Brown puts a saddle onto a runner on the turf, horseplayers had better pay attention. Brown wins 28% of his

turf races. He wins 32% of his non-graded stakes races and he's hitting at 29% overall in 2015. Partisan Politics may or may not get the right pace set-up. No worries. Jockey Javier Castellano has as good of a feel for pace on the grass as any rider in the country. He'll make sure that this talented daughter of More Than Ready is in position to run to the finish line first. One thing to note, this is Partisan Politics first race since she finished sixth in the BC Juvenile Turf last October.

1-Lismore, 8/1 - Her odds figure to drift because she really didn't run all that fast in her last race even though she finished third by 2.5 lengths. The problem is that jockey Eddie Castro tried to ration her speed just a bit too much in the early going. Cornelio Velasquez gets the call on Sunday and he figures to let her go from the outset. If Maragh aboard Celestine allows Velasquez to get an easy lead. She could coast to a victory. Lismore might add some value in the exotics if both Partisan Politics and Celestine are bet down in the Wild Applause.
Racing
Loading...