What a Preakness Stakes. That's the only way to describe it. American Pharoah did California proud by skipping over the mud at Pimlico and romping to a win in the Second Jewel of the Triple Crown. Let's turn our attentions to one of the races at Santa Anita on Sunday for a free quick pick. 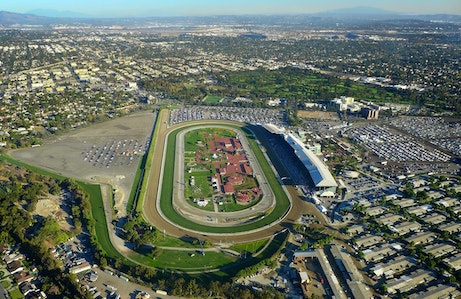 8-Something Unusual, 3/1 - The 7-year-old gelding trained by Mike McCarthy has been consistent in terms of speed ratings in his last 3 races. Even though he finished fifth in his last, he only lost by 2 lengths after running close to the pace in a $62.5K OC race. The cut back in distance should suit him well while the switch back to Drayden Van Dyke, who rode Something Unusual to a half a length, second place finish in an allowance down the hill 2 back, should help his chances. Something Usual will get plenty of speed to chase while Van Dyke can go for the lead if it's slow.

9-Clever Royal, 9/2 - Kent Desormeaux rides this four-year-old colt sired by Leading the Parade. Trainer Eddie Truman sends Clever Royal down the lawn for the first time on Sunday. He should have no problems handling it with expert downhill turf course rider Desormeaux in the irons. Clever Royal has won 3 out of 10 lifetime races. That means that he has a nose for the wire. The switch in distance and down the hill should do him some good. After watching how he performed in his last, it's obvious that something has to change. The colt finished fourth by 5 lengths. Expect Clever Royal to improve big time with Desormeaux back riding and the switch to the hill.

6-Tosheen, 5/1 - The speed of the speed could have a hard time shaking loose, but if the gelding does, gate to wire is not an impossibility. In fact, it should happen if no other horses go with Tosheen once the gates open. Tosheen has a win, a second, and a third place finish in 5 lifetime races. The gelding routinely cuts out fractions of :22 and :44 down the hill. It's going to be very difficult for anybody to beat him if he's loose on the lead in this race on Sunday.