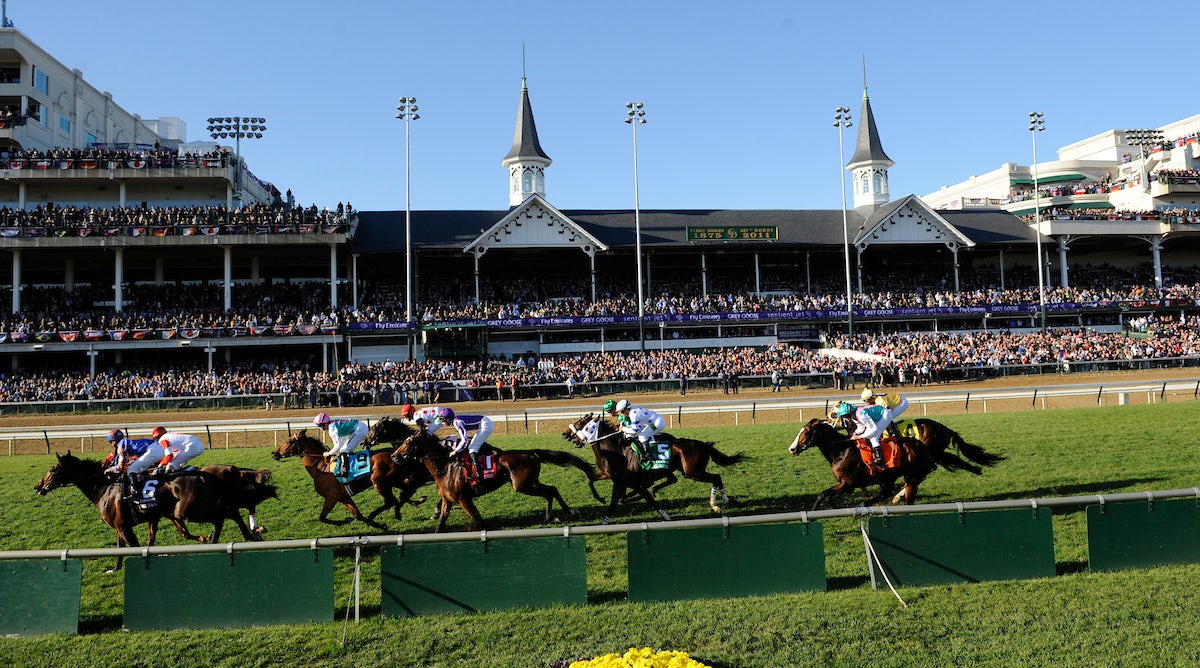 By winning the King George, Poet's Word has earned a "Win and You're In" berth to the 2018 Breeders' Cup Turf at Churchill Downs. Photo by © Breeders' Cup/Jamie Rhodes 2011

Gallant? Determined? Unwavering? Pick any similar adjective and you’ll have a word that roughly describes the relentless late rally turned in by Poet’s Word to win the King George VI & Queen Elizabeth Stakes (Eng-I) on Saturday at in England.

Even knowing the outcome, it seems impossible that Poet’s Word was able to close the gap that separated him from his younger stablemate Crystal Ocean. The pace in the 1 ½-mile event had been steady, but when Crystal Ocean pounced on the leaders turning for home and drove clear to a decisive advantage, it appeared that the race was all but over. After all, Crystal Ocean had not lost in three previous starts this year, is perfectly-suited to the distance of the King George, and appeared to be striding powerfully toward the finish line.

But Poet’s Word is no slouch himself, as he made abundantly clear when defeating the heralded Cracksman in Prince of Wales’s Stakes (Eng-I) going 1 ¼ miles at Royal Ascot last month. Trained by Sir Michael Stoute, Poet’s Word has been progressing steadily since last year and entered the King George in career-best form, but after settling near the back of the pack early on, he was seemingly left with too much ground to close as the field straightened into the homestretch.

Then, suddenly, everything change. Under encouragement from jockey James Doyle, Poet’s Word began to narrow the gap, gradually gaining ground with grinding strides. Crystal Ocean was still clear by two lengths passing the furlong marker, but Poet’s Word—now flying at full speed—cut the margin to a neck at the sixteenth pole. The two Stoute-trainees briefly locked together on even terms, but ultimately, Poet’s Word forged clear in the final strides to win by a neck, stopping the clock in a quick 2:25.84 seconds over a course rated “good to firm.”
By virtue of his hard-fought victory, Poet’s Word received a “Win and You’re In” berth to the 2018 Breeders’ Cup Turf (gr. I) at Churchill Downs, though only time will tell if his connections choose to accept the invitation. With two straight Group 1 wins under his belt, Poet’s Word has emerged as one of the leading contenders for the prestigious Prix de l’Arc de Triomphe (Fr-I) on October 7th at Longchamp, a prize that will likely take precedent over a trip to the U.S. for Breeders’ Cup. That’s not to say that Poet’s Word couldn’t target both races—it has been done many times before—but it’s still too early in the season to speculate on how events might play out.

In any case, Poet’s Word was unquestionably the star of the show on Saturday at Ascot, with Crystal Ocean losing nothing but the winner’s purse with his strong runner-up effort, leaving the rest of the field nine lengths behind. Both appear poised to enjoy strong seasons during the summer and fall.
Racing