Preakness Stakes could be instant replay of Derby

When the post positions were drawn for the 140th running of the Preakness Stakes this Saturday afternoon at Pimlico Race Course, the compact field of eight three-year-olds would be almost equally divided among those horses that competed in the Kentucky Derby and three "new shooters" who will look to make their presence known at big prices. 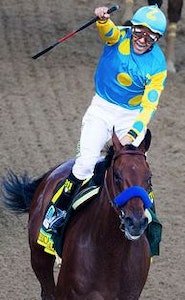 Heading the list is American Pharoah, who lived up to his role as the 5-2 favorite in the Kentucky Derby when he rallied from just off the pace while racing three-wide throughout to score by a length over Firing Line in 2:03.02 for the one-mile and one-quarter distance at Churchill Downs. This year's Preakness includes the top three finishers in the Kentucky Derby and many onlookers might be expecting the same result after glancing at the entries.

American Pharoah will certainly loom as the favorite again this Saturday, listed as the 4-5 morning line favorite for trainer Bob Baffert and owner-breeder Zayat Stables. American Pharoah has won all three of his starts this year and five of six career outings and last year's champion two-year-old colt has shown no indication of relinquishing his title this season. He drew the rail for the Preakness, which is hardly ideal yet certainly not the detrimental post that it is for the Derby, as Baffert can attest from an earlier experience with Lookin At Lucky. 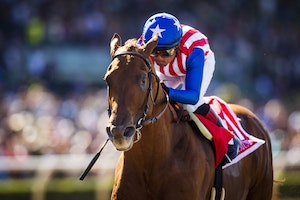 Drawing alongside the Derby winner is the other Baffert trainee, Dortmund, who suffered the first defeat in his seven-race career when third in the Derby after setting modest fractions through the first three calls. Dortmund had prepped for the Derby in Southern California and garnered the reputation as the west coast's top Derby hopeful when American Pharoah headed to Oaklawn Park for his preps. Dortmund will likely gain the tactical early advantage over his stablemate on Saturday, but he will have to display considerably more stamina than he did at Churchill Downs. 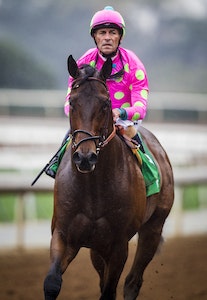 Perhaps the best horse with the chance of putting an early end to American Pharoah's bid for the Triple Crown is the same colt that finished second to him in Louisville - Firing Line. Six weeks after he had romped to a 14-length score in the Sunland Derby, Firing Line stalked Dortmund through the first mile of the Derby, surged to command on the far turn then was overhauled in the lane by American Pharoah in a gritty effort that was better than it looks on paper. His trainer, Simon Callaghan, has always indicated that Firing Line runs better fresh, but the six weeks between the Sunland Derby at Kentucky Derby may have proven to be detrimental in the end. He will start from post eight with Gary Stevens aboard.

Two other colts exit the Derby and arrive in Baltimore for the Preakness. Danzig Moon finished a solid fifth in the Derby following a good, second-place finish to Carpe Diem in the Blue Grass Stakes at Keeneland. He has not run a bad race this spring and figures to get at least a small piece of the prize this weekend. Mr. Z., who is winless in five starts this year for trainer D. Wayne Lukas, finished 13th in the Kentucky Derby but will improve on that effort by at least five spots this Saturday even if he cannot beat any of the three newcomers.

Of the three "new shooters" who bypassed the Derby and will run in the Preakness on Saturday, Divining Rod has the best chance for an upset. He captured the Lexington Stakes at Keeneland in his latest outing after two good tries at Tampa Bay Downs where he was third in the Tampa Bay Derby and second in the Sam F. Davis. He also owns a modest local angle, having won at first asking last fall at Laurel Park for Lael Racing, owners of the ill-fated Barbaro who won the Derby before breaking down as the heavy favorite in the Preakness.

Maryland's best hope for an upset, however, rests with Bodhisattva, hero of the Federico Tesio Stakes over the strip in his previous start for owner-trainer Jose Corrales. Bodhisattva has only won once in four tries this year and owns three wins in 11 career outings, but he is looking to join the likes of Oliver's Twist and Magic Weisner, who used their efforts in the Tesio as springboards to second-place finishes in the Preakness Stakes.

Rounding out the list of newcomers is Tale Of Verve, who makes his stakes debut on Saturday. Tale Of Verve needed five starts to garner his diploma and just did so last month at Keeneland against maiden special weight foes. From a class perspective he is clearly overmatched and will almost assuredly be the longest price on the board on Saturday and the odds-on choice to finish eighth and last.

On paper, it seems difficult to view the Preakness as anything but a potential replay of the Derby. Unless you can make a tepid case for Danzig Moon or Divining Rod - both of which are nice colts who could capture Grade II stakes at some point this spring or summer - then using the top three horses in the Derby in exactas and triples seems like the logical way to play the Preakness.

American Pharoah will be the odds-on choice in the middle jewel of the Triple Crown, but after he enjoyed an ideal journey in the Derby I am willing to select against him. In fact, after looking at the replays several times it seemed obvious to me that Firing Line actually ran the best race of the top three. Horses sitting second are often in a difficult spot. They cannot let the speed horse - in this case, Dortmund - get away too easily or allow the horse sitting third - American Pharoah - to get the jump on them.

When Firing Line went after Dortmund on the far turn, his rider had sensed the time had come to tackle one Baffert runner and then hope he could outkick the other. Stevens rode a tremendous race in the Derby, but the circumstances proved too favorable for American Phoaroah, who was simply in the catbird seat the entire journey. Horses such as Firing Line often move up off those efforts, while horses that prevail following golden journeys usually taste defeat in their next start when forced to tackle a little more adversity.

My guess is Firing Line overtakes Dortmund turning for home in the Preakness then outlasts American Pharoah to capture the middle jewel of the crown in 1:56.19 for the one-mile and three-sixteenths.
Racing
Loading...