The fastest qualifier to the All American Derby was Rancho El Cabresto, Inc.’s Apollitical Blood, who won his 440-yard trial in :21.352 seconds, over two lengths ahead of his rivals. The speedy son of Apollitical Jess is trained by Juan Aleman, and was ridden by victory by California-based jockey, Eduardo Nicasio.

Nicasio should be familiar to Quarter Horse handicappers who follow the Los Alamitos meet. Since he began riding there in 2008, he has won the Grade 1 Champion of Champions three times, winning with Last To Fire (2013), Good Reason SA (2011) and Apollitical Jess (2010). He also piloted Last to Fire in both the Go Man Go Handicap and Vessels Maturity and was the regular rider aboard the multiple stakes winning mare, Significant Heart.

Nicasio has never won the All American Futurity or Derby. What an amazing first for the rider should Apollitical Blood, the son of Apollitical Jess, another very special mount, reign supreme on Sunday, September 6! 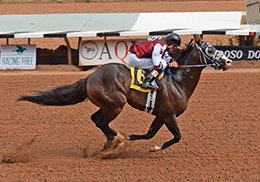