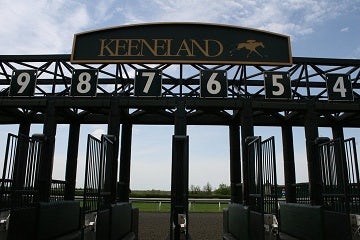 The second of the graded stakes on opening day at Keeneland on Friday is the Grade 1 Darley Alcibiades Stakes for two-year-old fillies. This race could produce a starter for either the Breeders' Cup Juvenile Fillies Turf or the Juvenile Fillies as it will be run on the Polytrack. Morning line favorite for the race is My Conquestadory, who is coming off a smashing win in her debut at Woodbine.

Winning the debut is tough for any horse, but there are certain conditions that make it harder. Horses making their first start in a race one mile or longer do not often win. Debut runners also don't often win races on turf. Also, a filly winning against the boys in her debut does not happen every day. A maiden debut runner in a graded stakes? Forget about it. So you throw those four things together and you would get a double digit loss, right? Well good thing My Conquestadory is unable to read the form as the two-year-old filly did all of these things in winning the Grade 2 Summer Stakes at Woodbine last month. She is 3-1 on the morning line, but if able to run another impressive race, 3-1 will look like a gift.

Four of the fillies in the field are coming out of the $100,000 Arlington Washington Lassie at Arlington Park including the first three place finishers; She's Offlee Good, Sweetsoutherndame and Maria Maria. These three would rate a long look to upset the favorite if not for the fact they staggered home in 27 seconds. This will not get the job done in a Grade 1 race at Keeneland.

Richies Party Girl is 4-1 on the morning line and the probable pace setter and while she should improve off her last race, she barely got the job done and may find this distance a bit too far for her. Instead, our upset pick is going to be Rosalind, the Kenny McPeek filly that won her debut on the turf at Ellis Park before finishing a better-than-looked third in the Grade 2 Pocahontas. In that race Rosalind had no pace to run into, but still came running late, making up five lengths in the stretch.

Of course if My Conquestadory runs her race, Rosalind may not find those five lengths.

Post time for the Alcibiades is 5:21 pm ET.
Racing