Keith and Kent Desormeaux were not the only brothers celebrating a big win on Preakness Saturday.  Following the second leg of the Triple Crown, two other brothers, Saul and J. R. Ramirez united to win the $281,007 Laddie Futurity (RG2) at Delta Downs. 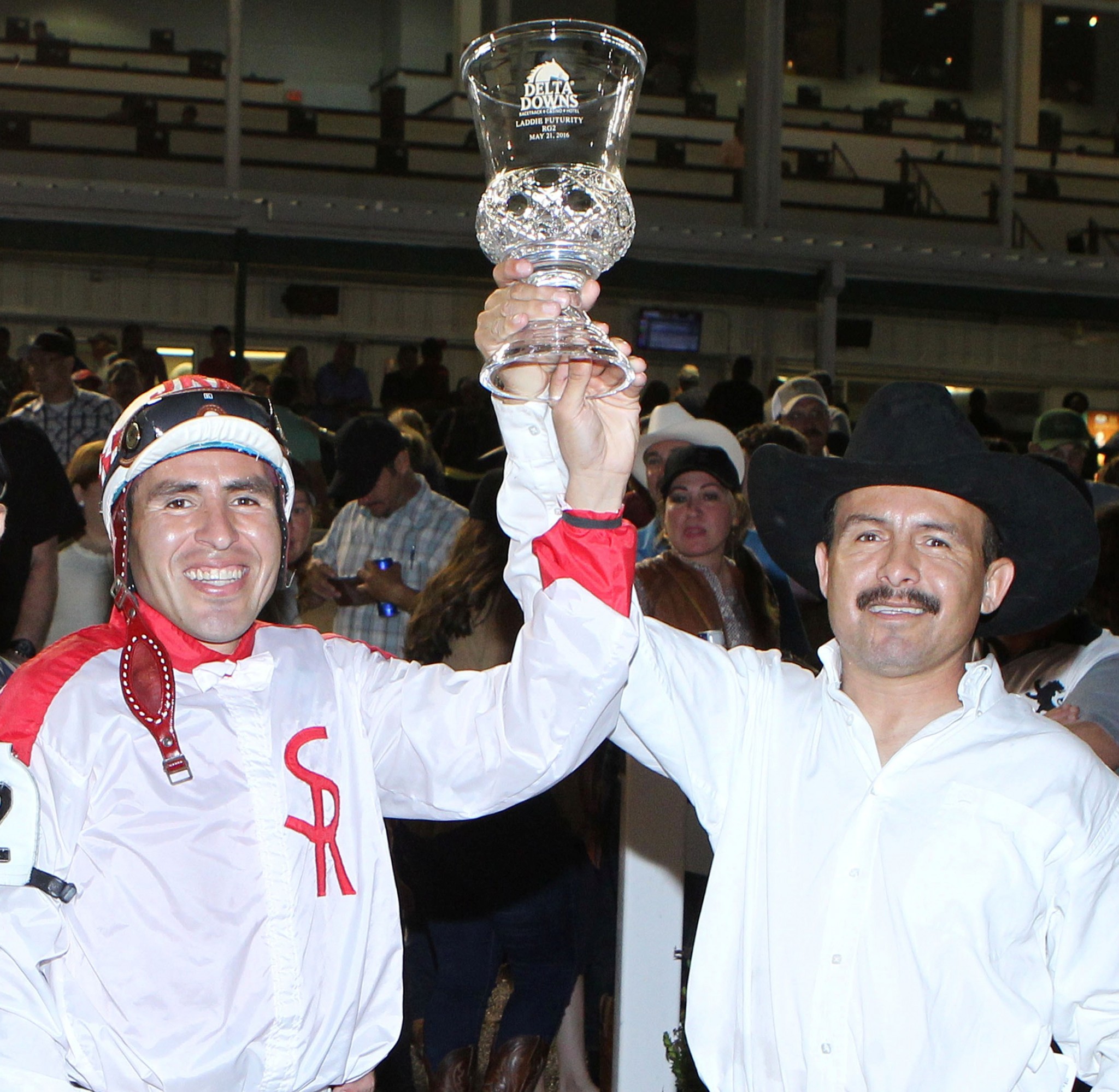 J. R. and Saul Ramirez celebrate their win in the Laddie Futurity on May 21 at Delta Downs

The victory by 2-year-old Louisiana-bred  Dragon N Panther meant a great deal to both men.  It was the first stakes win by trainer, Saul, who retired from race riding last December and embarked in his new career as a trainer just four months ago. It also marked a return to the saddle for younger brother, J. R., who had taken a three-year break from his successful run as a jockey in Texas and California.

Beginning in 2002, Jockey J. R. Ramirez was rapidly building a name for himself as one of the top young riders in the country. When he was just 23, clinched a rare sweep of riding titles at each Texas racetrack: Lone Star Park, Manor Downs, Retama Park and Sam Houston Race Park. He joined Saul on the  West Coast, winning several major stakes at Los Alamitos including the 2005 Ed Burke Million Futurity (G1) and back-to-back victories in the prestigious Golden State Million Futurity (G1) with Higher Fire in 2005 and Jess You and I in 2006.

So with the support of his family, J. R. got in shape and embarked on his comeback. Since getting his license in 2016, he has won eight races and was grinning ear-to-ear on May 7 when he notched his first stakes of the comeback. He guided Lester Colomb, Jr.'s Pyc First Prize Mia to victory in the $28,900 Mother’s Day Stakes and had an even bigger smile on Saturday when he rode Ricardo Cantu's Dragon N Panther ($27.20) in the $281,007 Laddie Futurity (RG2) for his brother, Saul.

"It's an honor to have a qualifier, and means a lot to have my brother ride for me," said Saul. "There will be no pressure come race time; he knows what to do".

"Saul is pretty laid back," explains J. R. "We both feel that if you have put in the work and are prepared. that's all you can do. If it's meant to be yours, it will happen."

The brothers have another quality family member at Delta Downs: cousin Raul Ramirez, Jr. He has been one of the top riders in the region and won the richest race in Louisiana, the $1 million LQHBA Breeders Futurity at Evangeline Downs two years in a row.

Saul, Raul and J.R. have a combined ton of knowledge and experience in the Quarter Horse racing world. Their support for each other provides an added ingredient that they do not take for granted.

"We are competitive, for sure, but never lose sight of who we are," states Raul. "It will always be family first. If J.R. wins and I run second, I am tickled for him."
Racing
Loading...