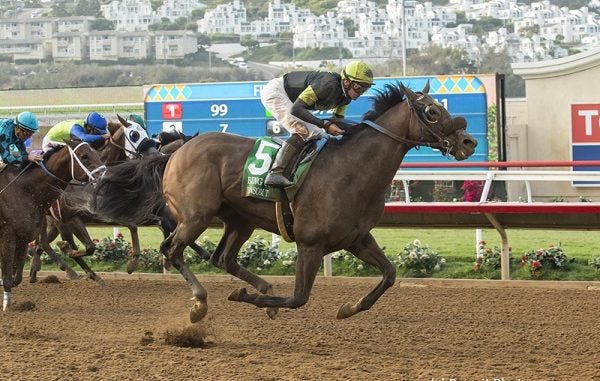 If you were experiencing feelings of déjà vu while watching Saturday’s $300,000 Bing Crosby Stakes (gr. I) at Del Mar, it’s certainly understandable.

Remarkably, the top two finishers in the six-furlong sprint were the same this year as in 2017, with Ransom the Moon beating favored Roy H to the finish line. But Saturday’s renewal was different in one noteworthy respect—unlike in 2017, there was no doubt about Ransom the Moon’s superiority.

Racing fans surely recall the drama of last year’s Bing Crosby, in which champion Drefong lost his rider shortly after the start and wound up carrying Roy H very wide on the turn, allowing Ransom the Moon to rally up the rail and post an upset victory.

This time around, the trips were reversed. Roy H, making his first start since a third-place finish in the Dubai Golden Shaheen (UAE-I) in March, secured a perfect position racing fourth early on, about four lengths behind fast fractions of :21.93 and :44.78 posted by the dueling leaders St. Joe Bay and American Pastime. Meanwhile, Ransom the Moon was reserved near the back of the pack, some nine lengths off the pace.

Rounding the turn, Roy H smoothly advanced into contention and appeared poised to strike while receiving a picture-perfect trip. Ransom the Moon was also unleashing a rally, but in contrast, he was forced to circle the field very wide in a trip somewhat reminiscent of Roy H’s wide journey in 2017.

But Ransom the Moon proved surprisingly resilient despite the poor setup, charging past rivals with authority to seize the lead at the sixteenth marker. Jockey Flavien Prat didn’t even need the whip for the final yards of the journey; he actually dropped it during the run down the homestretch, though it was apparent at that point that Ransom the Moon needed no further encouragement.
Following the race, Prat credited a change in tactics for producing Ransom the Moon’s big finish. “I was thinking I was riding this horse up too close,” Prat told Del Mar publicity. “I might have been taking his kick away from him. So today I went a different way. We had a big field and I knew there would be some pace, so I sat back with him. Then he came running. I had a lot of horse.”

Ransom the Moon’s margin of victory was 2 ¼ lengths, and while his final time was modest at first glance (1:10.08), Del Mar was not playing particularly fast on Saturday and the time translated to a respectable 100 Beyer speed figure. Behind him, Roy H battled on to edge the pace-tracking longshot Touching Rainbows for the runner-up spot, a solid enough return to action following his post-Dubai layoff.

In recording his first victory since last year’s Bing Crosby, Ransom the Moon received a “Win and You’re In” berth to the 2018 Breeders’ Cup Sprint (gr. I) at Churchill Downs. With his new (and successful) late-running style, he has reemerged as a horse to watch in the sprint division this year.
Racing