Ricky Ramirez Firing on All Cylinders 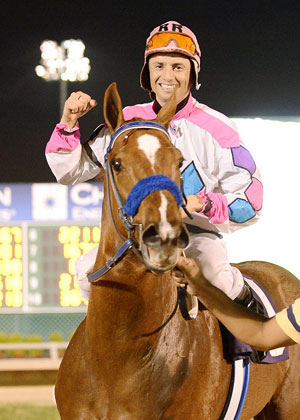 Quarter Horse jockey Ricky Ramirez is having a great year and is likely to add more icing to his cake this weekend. Ramirez is the leading rider at Lone Star Park and could wrap up the meet on Saturday, November 14 on a very high note.

Born in Odessa, Texas, Ramirez took out his jockey's license in 2003, and began by galloping for the Wood barn in Ruidoso, New Mexico as well as their base in Lubbock, Texas. He rides annually at Remington Park, Ruidoso Downs and Lone Star Park, with additional stakes engagements at Zia Park and Los Alamitos.

Ramirez,30, has a contender, Tres Friends, in the richest race in the Lone Star State, the $1 million Texas Classic Futurity (G1). He also rides Bodacious Eagle in the $415,690 Texas Classic Derby.

Both runners are trained by Trey Wood, and Ramirez has forged a solid bond with the second-generation conditioner. The duo have already teamed up to win the $448,515 Dash For Cash Futurity (G1) at Lone Star Park last month.

Ramirez is currently the leading Quarter Horse rider in the country with 84 wins,71 seconds and 46 third-place finishes. His mounts have won $2.8 million through the first week of November.

Post time for both Friday and Saturday night is 6:35 p.m. (Central).