Tuesday evening might have seemed like just another night for racegoers, but for standardbred racing fans in the Mid-Atlantic region it marked the beginning of the Rosecroft Raceway fall meet.

During the summer Rosecroft changed hands from Penn National to the Maryland Jockey Club and Tuesday evening marked the opening night for the MJC at the helm. Sal Sinatra was on hand for the opening card, as was trackside handicapper Stan Salter.

Tuesdays opener was a non-winners of $4500 last five starts class for pacers that went to Dancing Rusty (Roger Plante, Jr) who gained command before passing the wire the first time, rolled by the half in 55.3 and three-quarters 1:24.3 and held sway in the lane to score in 1:53.2. An eight-year-old Ponder gelding owned and trained by Basil Sapienza, Dancing Rusty notched his fifth win in 25 starts and pushed his seasonal earnings past $22,000.

Several races later on the card in a non-winners of $2500 last five class for older pacers, Caviart Tyler (Jonathan Roberts) easily overcame post seven to gain command and then set honest fractions of 27.2, 56.2 and 1:24.3 en route to a two-length score in 1:52.4. A nine-year-old Dragon Again gelding trained by Megan Roberts, Caviart Tyler now owns six wins and $25,500 banked from 26 starts this year and boasts 46 wins and nearly $270,000 banked from 229 lifetime tries.

One race later in the featured $12,000 Open, Diamondkeeper (Plante) overcame a long, first over trip to wear down Feel Like A Fool (Roberts) to prevail by a neck in 1:52.1. A five-year-old Pine Valley gelding out of a Nihilator mate owned and trained by Sapienza, Diamondkeeper now sports nine wins and $52,000 banked from 25 starts this year and he equalled his lifetime mark with his latest tally. Diamondkeeper was the selection for Ocean Downs horse of the meet by the Mid-Atlantic Chapter of the U.S. Harness Writers Association.

Two races later on the card, Hide Me Away (Russell Foster) overcame post eight to gain command and lead throughout to capture another non-winners of $4500 last five starts class in 1:51.2. A seven-year-old Dragon Again gelding owned and trained by Arty Foster, Jr., Hide Me Away posted his first win in 27 starts this year and recorded the fastest clocking of the night.

Two races later in a non-winners of $4000 last five class, Chesapeake Bay (Kim Vincent) rallied from midpack to score by a length in 1:53.3. A six-year-old Artiscape gelding owned and trained by William "Buddy" Bright, Chesapeake Bay now owns two wins from 17 starts this year and 15 victories from 114 career outings. 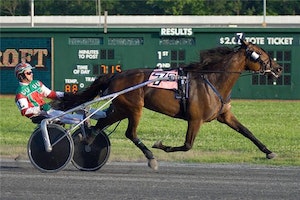 One race later on the card, Boardwalk Gangster (Roberts) capped the inaugural pick 5 with a handy, wire-to-wire score in 1:54.1 in a non-winners of $2500 last five starts class. A five-year-old Cams Card Shark gelding owned and trained by Amanda Malone, Boardwalk Gangster notched his second win from 21 seasonal outings.

Across the Chesapeake Bay Bridge at Harrington Raceway, post positions were drawn for the 10th renewal of the $150,000 Bobby Quillen Memorial and the draw proved revealing.

Wiggle It Jiggleit, the reigning horse of the year and the top rated horse in the land this season, drew the coveted rail against seven rivals. Second last weekend in the Jim Ewart Memorial at Scioto Downs, Wiggle It Jiggleit will seek redemption in his first local appearance this year. 'Wiggle It' owns the all-age track record of 1:49 flat.

Mel Mara (Corey Callahan) prepped for the Quillen with a handy 1:50.1 score on Monday evening, but Tuesday afternoon he drew the dreaded eight hole. Luck Be With You, who parked Wiggle It past the opener in 25.2 last weekend at Scioto, drew post four, just outside of defending Quillen hero Mach It So (Tim Tetrick) who won an overnight event last Saturday at Yonkers in 1:51.2.
Racing
Loading...