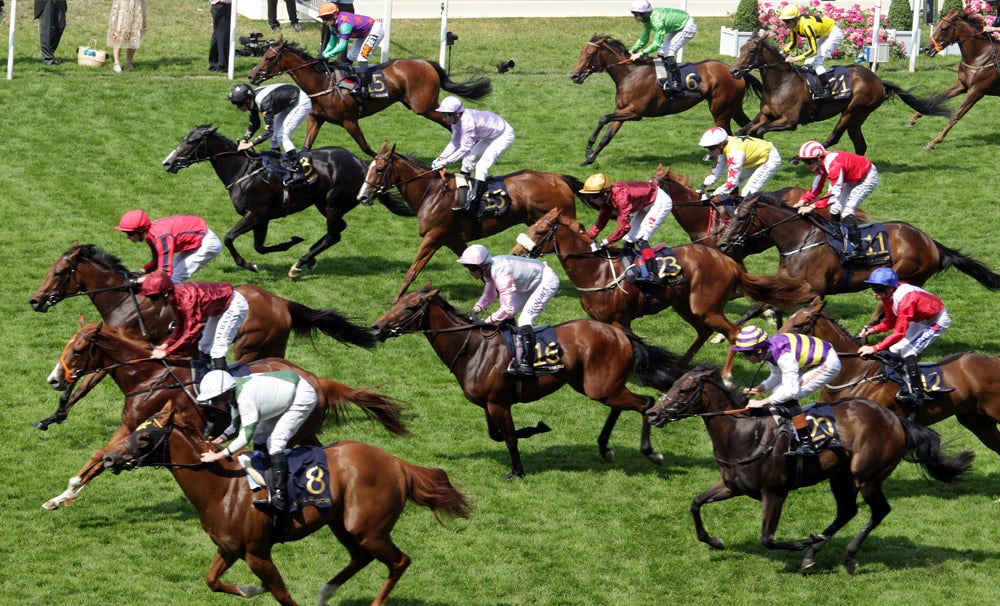 Horses and jockeys during the 2017 Queen Mary Stakes at Royal Ascot - Photo by Horsephotos.com

The highlight of the racing action on Day 3 of the 2019 meeting is the Gold Cup (G1), a 2 1/2-mile test of stamina that ranks among my favorite races anywhere in the world.

I’m also intrigued by the much shorter Norfolk Stakes (G2) for 2-year-olds, so let’s come up with a few plays for these two competitive events.

It’s tough to have a strong opinion in this five-furlong sprint, which has attracted 15 lightly raced juveniles, so let’s take a couple of small chances with longshots. #10 Mount Fuji won for trainer Aidan O’Brien on debut at Cork, where he rallied to win narrowly after a slow start. He’s bred to sprint and will have O’Brien’s go-to jockey Ryan Moore in the saddle. O’Brien’s juveniles typically improve off their debuts, so it’s not unreasonable to conclude Mount Fuji will take a step forward in his second start.

The filly #15 Emten is also worth a look. She scored a debut win at Windsor for trainer Jamie Osborne, and while Windsor isn’t one of England’s elite tracks, it’s worth noting several Norfolk winners have prepped at Windsor over the last dozen years. Emten had the option of running in the Queen Mary Stakes (G2) against fillies Wednesday, but scratched in favor of the Norfolk. I’ll view that as a positive sign.

It’s going to take a monstrous effort for anyone to dethrone #4 Stradivarius, who defeated a terrific field to win this marathon race in 2018. Conditioned by John Gosden and regularly ridden by Frankie Dettori, Stradivarius has won six straight group stakes races going 1 3/4 miles or farther and opened the season with a cozy victory in the Yorkshire Cup (G2), which he also won in 2018 before his success at Royal Ascot.
Speaking of Ascot, Stradivarius is undefeated in four starts over the course, and if you think the rain-soaked going will trip him up, consider how he won the two-mile QIPCO British Champions Long Distance Cup (G2) at Ascot over soft ground in October. If this race turns into a test of stamina—and how can it not?—it’s hard to envision anyone out-staying Stradivarius.

But since Stradivarius will be a short price, let’s play him over a couple longer-priced runners in exotics. #9 Flag of Honour hails from the barn of O’Brien, a seven-time Gold Cup winner, and showed off his stamina while winning the 1 3/4-mile Irish St. Leger (G1) as a 3-year-old in 2018. After he kicked off 2019 with a trio of runner-up efforts running 1 5/16 miles or shorter in group stakes races, Flag of Honour will stretch back out in distance and should be ready for a peak effort Thursday.

#5 Thomas Hobson is another appealing longshot. The winner of the 2018 Doncaster Cup Stakes (G2) going 2 1/4 miles, he handled soft ground just fine when he came in second to Stradivarius in the British Champions Long Distance Cup and could relish the going in the Gold Cup.