Saturday's Races Were Well Worth the Wait

Saturday afternoons Breeders Cup Championship races at Santa Anita offered racing fans a chance to see the best horses in the world compete on the grandest stage and open the door for another month of debate.

When Beholder nipped previously unbeaten Songbird to capture the $2 million Breeders Cup Distaff on Friday - a race that would have been better served on Saturday - paved the way for a quartet of horses to step forward and stake their claim to horse of the year honors.

But as luck would have it the three primary contenders - Tepin in the Mile, Flintshire in the Turf and then California Chrome in the Classic - all met the same fate, finishing second in their respective Breeders Cup races. Two of the horses that beat them have no chance at divisional honors let alone horse of the year but Classic winner Arrogate is now a major player in several categories. 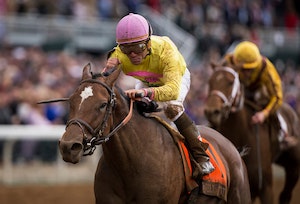 Arrogate emerged on the scene belatedly by winning the Travers in track record time then wore down California Chrome in the lane to prevail by a half-length in 2:00.11 for the mile and one-quarter. Arrogate has won five of six starts and earned over $5 million for trainer Bob Baffert and now looms the logical choice to garner division honors among three-year-olds since neither of the Triple Crown leg winners - Nyquist, Exaggerator and Creator - were on hand for the Breeders Cup races or did anything to distinguish themselves throughout the campaign.

But voters are still going to have a difficult time selecting Arrogate for horse of the year over California Chrome, Songbird or Tepin, all of which had longer campaigns. Arrogate, California Chrome, Tepin, Songbird and Flintshire are all destined for at least one Eclipse Award, but which one gets the most coveted title of them all is going to be debated for months to come.

Then on Saturday night at The Meadowlands in New Jersey, Breeders Crown winners Walner (Tim Tetrick) and Someomensomewhere (Marcus Miller) captured their respective Kindergarten finals. Walner was clearly the more impressive of the pair with his 1:53 score for trainer Linda Toscano.

Then on Saturday night at Yonkers Raceway, Mach It So (Jason Bartlett) lived up to his role as the even-money favorite when he overhauled pacesetter Keystone Velocity in the lane to score in 1:50.2. Trained by Jeff Bamond, Jr., Mach It So has frequently faced the best aged pacers in the land the last two years in the George Morton Levy Memorial Series at Yonkers and the $150,000 Bobby Quillen Memorial at Harrington.

Both Mach It So and Keystone Velocity, who was also in the latest edition of the Quillen, are both being pointed to the inaugural $100,000 Free State Free-For-All at Rosecroft on November 22 which is also expected to attract reigning horse of the year Wiggle It Jiggleit, Mel Mara, Shamballa, Bit Of A Legend N and likely one trainee from Ron Burke and Chris Oakes.
Racing
Loading...