This week at Southland I have been taking a look at greyhounds who have at least a two race winning streak going, as some of you may remember I did a short study like this last year and the results turned out to be quite interesting. On Saturday evening's program there are seven such greyhounds running that fit this criteria and who are looking to keep their winning streaks going. I've listed these greyhounds and the races they are in below and will have a recap on how many were able to keep that streaks going.  Good luck to everyone with your wagering opportunities and remember that BetAmerica is always available should you have any questions. Thanks for reading. 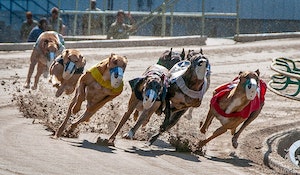 Race 5 - 583 yards - Grade B - GOOD KINDA BAD ( box 5) - going for his 3rd straight win, all on the 583 yard course after having trouble in his three previous races over the 660 yard course. The move to a longer distance for those three races certainly paid off now that he's back on the shorter course as he's coming out of the box very quickly now and holding on to the lead when he gets to the front.

Race 10 - 583 yards - Grade AA - CBJ PEPSI (7 box) - he's trying to make it 3 in a row and while his chances are decent to do so, he'll be facing some tough competition in this field with Dark N Demure (2 box) and Nashapelli (5 box) both of which have proven to be very consistent winners in this top grade class.

Race 12 - 583 yards - Grade A - VJ MIDNITE (7 box) - he's moved back up to A grade with 2 straight wins and 4 top three finishes in his last six races. That being said, he will need to continue to break quickly as he's going up against some quality opposition here with Chasmo's Dutch (3 box), Xkt Dave Turin (5 box) and Mrl King Pin (8 box) all giving it their best shot.

Race 15 - 583 yards - Grade A - FLY M YAGERBOMB (7 box) - back in Grade A after two straight wins and having drawn a good post for his mid to wide running style he might just surprise us again. Ellie (1 box) and Fiesta Magdalene (2 box) should be in the chase as well.

Race 17 - 660 yards - Grade AA - WW BLACK I SUE (7 box) - this runner has certainly hit her stride as of late winning two straight and 3 of her last 4 races. She's got a strong late closing move but it's going to be very tough to make it three in a row as Oshkosh Kid (8 box) will certainly have a say about it as he is the recently crowned champion of the Festival Of Stake Middle Distance division.

Race 18 - 820 yards - Grade TA - PLAY BY MY RULZ (5 box) - after two solid wins in a row, he will find the going a lot tougher here but could still get the job done. Oshkosh Tiko (2 box) will be his biggest threat here as this rail runner is posted well with an inside box.
Racing
Loading...