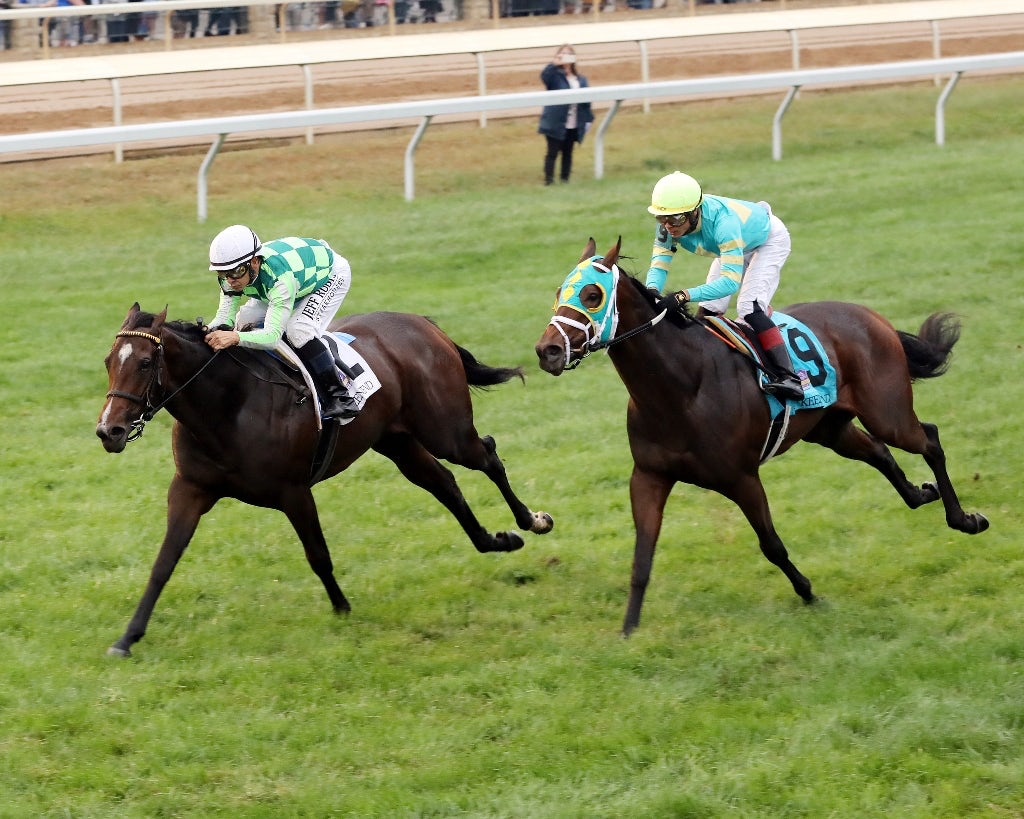 I’ve already shared my plays for the two feature events—you can read those here—but if anything, the juvenile turf races are even better wagering propositions. Each one has attracted a full field, and the presence of numerous European shippers will make handicapping these competitive races a daunting task.

Need some assistance to guide your wagering strategy? Let’s consider three spot plays on a $100 budget:

Fully half of the dozen runners in this five-furlong dash are European shippers, and I’m tempted to oppose them all. Three of them have never negotiated a turn, making the sharp bend at Santa Anita a significant obstacle, and the pace of this all-out American dash figures to be faster than they’re accustomed to facing. Just look at the chart of the 2018 Juvenile Turf Sprint -- the six European shippers were racing 5-7-8-10-11-12 after the opening quarter-mile. None finished better than third or closer than 2 ¾ lengths to the winner.

Instead, I’ll favor #7 Kimari and #9 Four Wheel Drive. Both are trained by Wesley Ward, a master at conditioning juvenile sprinters. The filly Kimari is a head away from being undefeated in four starts and has won stakes races while setting the pace and while rallying from dead last. Four Wheel Drive is a perfect 2-for-2 and cruised to a decisive three-length victory in the Futurity Stakes (G3) at Belmont on October 6. A clean, pace-pressing trip should be in the offing from post nine.

Let’s bet them both on top of an exacta while adding #8 Dr Simpson underneath. If you’re going to back a European, this daughter of Dandy Man seems like a good choice considering her two victories (including the Group 3 Mercury Stakes) came in her lone two runs over left-handed courses. She actually broke her maiden at Chester, a nearly round one-mile course with a short homestretch.

#12 Arizona will be the popular play since he’s cracked the superfecta three times at the Group 1 level and is conditioned by Aidan O’Brien, a four-time winner of the Juvenile Turf. But Arizona has never negotiated a turn and will have to use his speed early to avoid a wide trip while breaking from post 12.

O’Brien’s second entrant, #13 Fort Myers, is appealing at a much larger price, considering he’s 2-for-2 over the left-handed synthetic track at Dundalk. A son of War Front out of a Galileo mare, Fort Myers should thrive while stretching out to a mile, though like Arizona, he’s marooned in an outside post and might be destined for a wide trip.

I’m arguably more intrigued by #5 Vitalogy, a former European with promising form. In his North American debut, he rallied gamely from behind a slow pace to finish third in the Summer Stakes (G1) at Woodbine, sprinting the final quarter-mile in a sharp 23.06 seconds.

Then in the Bourbon Stakes (G3) at Keeneland, Vitalogy endured a ridiculously wide trip while attempting to rally from last in a race dominated by speed horses. He also raced greenly and lugged in down the homestretch but despite the obstacles, Vitalogy came up just a neck short of victory.

Let’s box Arizona, Fort Myers, and Vitalogy in the exacta:

There are some talented Europeans entered in the Juvenile Fillies Turf, including Group 1 winner #9 Albigna and Group 1-placed #5 Daahyeh. But we’ve seen some seriously high-class European fillies fall to defeat in this race, with the home team claiming victory nine times since 2008.

Trainer Chad Brown has accounted for five of those wins, including four since 2014, so could handicapping the Juvenile Fillies Turf be as simple as supporting #13 Selflessly? This Brown-trained daughter of More Than Ready employed pace-stalking tactics to win the Miss Grillo Stakes (G2) at Belmont with a strong turn-of-foot, beating stakes winner #7 Crystalle by just under a length while sprinting the final five-sixteenths of a mile in :28.51 over a “good” course.

Four of Brown’s five Juvenile Fillies Turf winners prepped with a victory in the Miss Grillo, so Selflessly boasts a historically significant profile. Despite this, she's 8-1 on the morning line, and at that price she’s definitely worth a win bet. We’ll also play her in the exacta and trifecta while emphasizing Crystalle and runaway Jessamine Stakes (G2) winner #12 Sweet Melania underneath: Good luck!
Racing