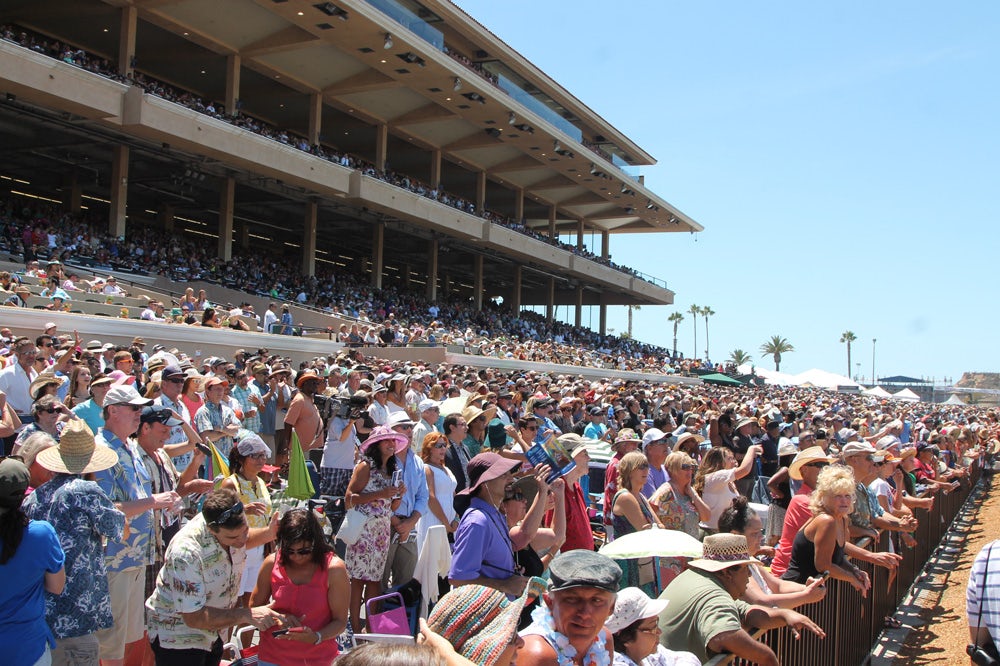 Summer has officially arrived at Del Mar, “Where the Turf Meets the Surf.”

Del Mar’s anticipated summer race meet gets underway Wednesday with a 10-race card. It’s a can’t-miss event on the racing calendar, so even if you can’t make it out to California to attend in person, we can still take ~$50 and celebrate opening day with a couple of spot plays:

Call it a hunch, but I’m siding with the 12-1 first-time starter #7 Very Boisterous in this five-furlong sprint for California-bred 2-year-old fillies. Very Boisterous doesn’t boast the most eye-catching work tab, but she’s trained by Steven Miyadi, and Miyadi has performed excellent work with juveniles at Del Mar over the last two summers. In addition to posting hefty win percentages (31% in 2018 and 25% in 2017), he’s conditioned five juvenile winners at 8-1 or higher, including three who were first-time starters.

Miyadi’s record alone makes Very Boisterous appealing, but she’s also interesting from a pedigree perspective. It’s encouraging that her full brother, Boisterous Boy, was a juvenile winner sprinting 5 1/2 furlongs, which suggests there’s a bit of speedy, early maturing blood in Very Boisterous’ family. And if you like jockey angles, Miyadi has assigned Abel Cedillo the mount, and together they’ve teamed up to win with three of their six runners over the last 60 days.

Very Boisterous might not be the type of filly to single in a Pick 4, but at 12-1 I think she’s worth a win bet. I’ll also play her in the double with my top four choices in the Oceanside Stakes.

The feature race on opening day is a one-mile grass test for 3-year-olds, and it’s shaping up to be a competitive event. There’s no clear standout among the dozen entrants, though the 9-5 morning line favorite #3 Jasikan looks solid on paper. Following a third-place finish in the one-mile Singletary Stakes at Santa Anita, his U.S. debut, Jasikan produced a strong rally into a slow pace to win a one-mile optional-claiming allowance by a length, and he rocketed the final quarter in :23.23 over a course labeled “good.”

But Jasikan will encounter firm turf Wednesday, and for a race with 12 entrants, there isn’t a ton of speed in the Oceanside field. That could give an edge to the 15-1 shot #6 City Rage, who broke his maiden in gate-to-wire fashion going a mile at Santa Anita last month. A son of City Zip, City Rage will be ridden by Drayden Van Dyke, who has enjoyed strong success riding turf routes at Del Mar in recent years.

The British-bred #8 Gregorian Chant, fourth in the 1 1/8-mile Cinema Stakes while attempting to rally into slow fractions, can be in the mix too if he rebounds to the form of his U.S. debut, in which he came roaring from off the pace to win an optional-claiming allowance by 2 1/4 lengths. #10 Nolde also warrants respect. Trained by John Shirreffs, this pace-tracking son of Pioneerof the Nile is 2-for-2 since switching to turf, with both victories coming over a mile.

Let’s aim for a big score by boxing these four in the exacta and trifecta.