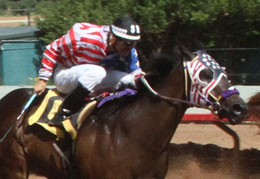 Mad About The Moon Runs Friday at Sunland Park

Live racing at Sunland Park will resume on Friday, February 26 after a lengthy closure due to an EHV-1 outbreak. Officials shut down all racing on January 22 with a quarantine was imposed on the stable area and surrounding training centers.

The first four races on the Friday card are Quarter Horse dashes, with the 350-yard, $50,000 KOFX Radio Stakes set as the fourth race of the afternoon. Mad About The Moon, a 4-year-old son of champion First Moonflash racing for David G. Valdez of Odessa, Texas, drew the rail post and was installed as the 5-2 morning-line favorite.

Trained by Juan Gonzalez, Mad About The Moon should find this spot a tad easier than his last race, the 400-yard, $350,000 Championship at Sunland Park (G1) on January 3. He finished off the board, but has a strong history of placing in graded stakes having run in the $2.6 million All American Futurity last September at Ruidoso Downs. The New Mexico-bred has earned $750,063 in 14 starts. Adrian Ramos has the call. His rivals include Queen Arabella, a 3-year-old daughter of Heza Motor Scooter trained by Donna McArthur. She will be making her first start against older horses, but ran third to top juvenile, BV Midnite Express, in the January 3, $250,000 Sunland Park Juvenile Invitational Stakes.

Idaho-bred The Devils Rainbow is another solid contender. He will break from post position seven under Esgar Ramirez.