Surface Switch No Issue for Catholic Boy in Travers Stakes 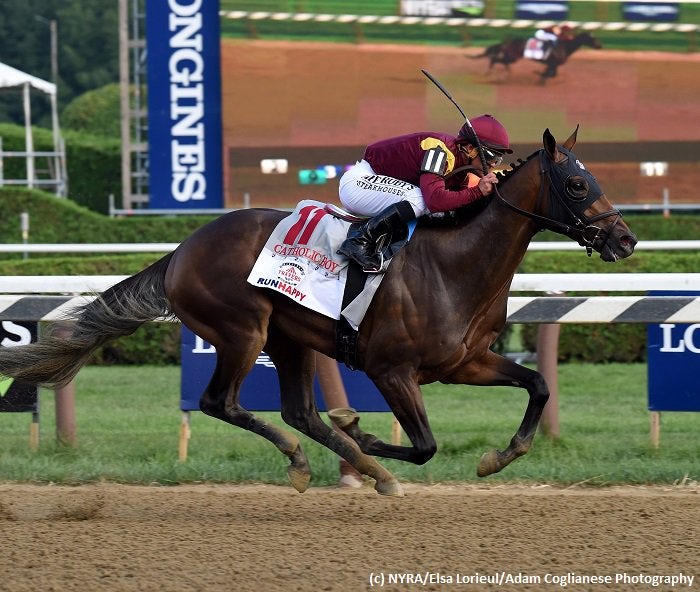 Turf to dirt? No problem!

A switch in racing surfaces might be tricky for some horses to handle, but it certainly wasn’t an issue for Catholic Boy, who utilized his exceptional talent and stamina to crush nine rivals in Saturday’s $1,250,000 Travers Stakes (gr. I) at Saratoga.

It’s not like Catholic Boy had never shown an affinity for dirt—last winter, he pulled off a successful turf-to-dirt move to win the 1 1/8-mile Remsen Stakes (gr. II) at Aqueduct in decisive fashion, which was the first indication of his above-average stamina. And when the Jonathan Thomas-trained runner switched back to turf earlier this summer, he confirmed his class by scoring hard-fought victories in the Pennine Ridge Stakes (gr. III) and the Belmont Derby (gr. I), with the latter race coming over the same 1 ¼-mile distance as the Travers.

So it really shouldn’t come as a surprise that Catholic Boy was much the best in the Travers. With jockey Javier Castellano in the saddle, the son of More Than Ready enjoyed a picture-perfect trip pressing modest fractions of :23.30, :47.81, and 1:11.97 carved out by the UAE Derby (UAE-II) winner Mendelssohn, which was particularly advantageous since Saratoga seemed to be favoring speed throughout the day. It allowed Catholic Boy to stay out of the dirt kickback, a beneficial trip for a horse more accustomed to racing on grass.

Rounding the far turn, Mendelssohn and Catholic Boy began to open up on the rest of the field, but Catholic Boy was always moving strongest and pulled away to a commanding advantage in early stretch. From there, the outcome was never in doubt as Catholic Boy cruised home the winner by four lengths in 2:01.94 seconds, earning a 104 Beyer speed figure.

Mendelssohn, to his credit, stayed on gamely to finish second in an effort that was significantly better than his third-place finish in the Dwyer Stakes (gr. III) last month. Coming home one length behind in third place was Bravazo, who endured a somewhat tricky trip racing between horses in the middle of the pack before launching a sustained rally that might have been good enough to earn the runner-up spot over a fairer track.

But for obvious reasons, the majority of the post-race attention was focused on Catholic Boy, who has thoroughly stamped himself as a multi-surface threat who could realistically target either the Breeders’ Cup Classic (gr. I) or the Breeders’ Cup Turf (gr. I) in November at Churchill Downs. The Classic, held over the same distance as the Travers, could be an especially appealing option since Churchill Downs has a reputation for playing favorably toward horses with good form on grass.

There’s also a chance, albeit a slim one, that if Catholic Boy goes unbeaten for the remainder of the year and prevails in the Classic, he could edge out Triple Crown winner Justify for Horse of the Year honors. Would it be unprecedented? Yes. But Catholic Boy has already shown that he can achieve the unusual and unexpected, so anything is possible.
Racing