There were some surprises in the first Kentucky Derby Futures Pool. One none surprise was the fact that the mutuel field closed at 3/5. The field is almost always the favorite at the end of the first Kentucky Derby Futures Pool. 3/5, as I wrote last week, is pretty much a wager on the Jerry Hollendorfer trained Songbird or that some other top prospect will emerge. Songbird remains number one on my Derby list at this point.

But, there were other big time surprises once the pool closed this past Sunday. Check out what surprised me after studying the closing odds.

The only horse to ever win the Breeders Cup Juvenile and the Kentucky Derby was Street Sense. He won the Juvenile in 2006 and the Derby in 2007. But, here's the thing, Street Sense won both races over the Churchill Downs' dirt. The best horse in Street Sense's year, Curlin, went into the Derby with only 3 races on his resume. Curlin's first race was February of that year. A more seasoned Curlin probably would have beaten Street Sense. Brilliant horses like Timber Country, Unbridled's Song and Favorite Trick couldn't pull off the double. Why do horseplayers believe that Nyquist can?  The reason why the Juvenile-Derby Double is so hard to accomplish is because the Juvenile winner's peers, like in the case of Favorite Trick in 1997 and 1998, catch up with the Juvenile winner.

2. No Love Shown to Baffert Horses - 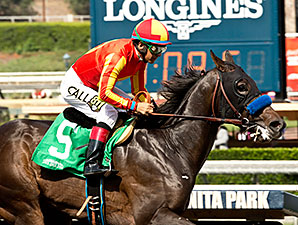 Toewes On Ice, the Bob Hope winner whom I thought offered the best value in the field at 30 to 1, closed at odds of 49 to 1. Sure, Toewes On Ice ran a slowish time in the Bob Hope, but he waited to be headed before coming on again while along the rail. That shows talent to me. Mor Spirit, who closed at odds of 31 to 1, ran exceptionally well in the Kentucky Jockey Club Stakes. He did all of the running on the front end. He's a gigantic front runner-presser type with excellent action who was sired by Eskendereya. Mor Spirit's grand sire is Giant's Causeway. Defrong closed at 40 to 1. Maybe, that's where all the Baffert money is going since Defrong only has a maiden win to his credit.

Sure, Moyhamen comes out of the hottest sire on the planet, Tapit, but Airoforce was more impressive winning the Kentucky Jockey Club Stakes than Moyhamen was winning the Remsen. Airoforce usually presses the pace. He rated behind a wall of horses, pulled out when his jockey asked him to, and then ran by the front-runners in the stretch. He got a ton of dirt in his face and still won going away. Airoforce might be better bred for the classic distance than Moyhamen. Tapit is a great sire. But, so far, his horses are very good going a mile to 1 1/8 miles. Airoforce's grand sire is Tiznow, the only 2 time winner of the Breeders Cup Classic. Trainer Mark Casse has another Kentucky Derby contender in Conquest Big E, who closed on Sunday at 39 to 1.

4. Horseplayers weren't thinking about the future -

It's called the Kentucky Derby Futures Pool because it's about the future. But, nobody seemed to be thinking about the future. Every year, the field ends up as the favorite, but how can anybody explain the crazy odds on some other major contenders? Flexibility, trained by Chad Brown sired by Bluegrass Cat and out of a Vindication mare, closed at 71 to 1. The horse finished second to Moyhamen in the Remsen. Gift Box, also trained by Brown and whose grand sire is Candy Ride and grand sire on his dam's side is Unbridled's Song, closed at odds of 47 to 1. Sail Ahoy, who made a terrific move in the Remsen only to flatten out in the stretch and finish fourth, closed at odds of 45 to 1. Sail Ahoy is trained by Shug McGaughey. Shug trained Orb to a Kentucky Derby win in 2013. Sail Ahoy was sired by Bernardini and is out of a Seeking the Gold mare. The Steve Asmussen trained Gun Runner finished fourth in the Kentucky Jockey Club Stakes. He appeared to have trouble changing leads in the stretch. Like Sail Ahoy, the Steve Asmussen trainee made a great move to get into contention. Gun Runner was sired by Candy Ride. His dam was sired by Giant's Causeway. His closing odds were 57 to 1. Horseplayers missed out on great underdogs in the first Kentucky Derby Pool by concentrating on the field, the Juvenile winner, and backing the winners of this past Saturday's two prep races.

Make sure to enter the BetAmerica Horse Racing Contests! There is no off-season for horse racing. Take advantage!