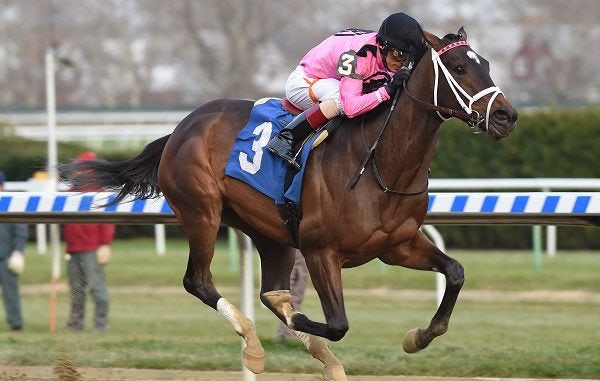 Although the glory days of synthetic racetracks seem to be over in North America—tracks like Santa Anita, Del Mar, and Keeneland have all gone back to dirt in recent years—many synthetic racing surfaces remain installed at tracks across the continent and can provide tricky challenges for handicappers.

Everyone understands that dirt and turf are two very different racing surfaces, but where do the various synthetic tracks fit in? Is Polytrack more like dirt or turf? What about Tapeta?

You’ll often hear, as a general rule, that synthetic tracks play more like turf than dirt—in other words, you should expect turf horses to successfully transfer their form to synthetic tracks and vice versa, while being more skeptical of horses making the switch from dirt to synthetic or from synthetic to dirt.

But like many general rules, this one has plenty of flaws and certainly isn’t universal. Perhaps its biggest flaw is that it’s become an accepted rule despite the fact that horses routinely switch from dirt to synthetic and back without issue, running well at inflated prices since many handicappers overlook them due to the surface switch.

In particular, horses that race over the synthetic track at Woodbine seem to be just as effective when switching to dirt. In early 2017, State of Honor—coming off a fairly unremarkable two-year-old season at Woodbine—arrived in Florida and proceeded to finish second or third in four straight Kentucky Derby prep races on dirt at Gulfstream Park and Tampa Bay Downs, doing so at odds of 13-1, 11-1, 9-1, and 4-1. The previous year, Ami’s Flatter made a similar move, parlaying a maiden win at Woodbine into a 13-1 runner-up effort in Gulfstream’s Mucho Macho Man Stakes. As an older horse, Ami’s Flatter made the same synthetic-to-dirt move while winning an allowance race at Gulfstream.

The examples go on and on. As a two-year-old, the filly Wonder Gadot won the Mazarine Stakes (gr. III) over the Woodbine Tapeta before switching to dirt and rattling off a series of strong efforts in major stakes races, including a win in the Demoiselle Stakes (gr. II) and a runner-up finish in the Kentucky Oaks (gr. I). She then returned to the Woodbine Tapeta and scored a convincing win in the Queen’s Plate Stakes against colts.

Ami’s Mesa? She dominated her opposition at Woodbine, made her dirt debut in the 2017 Breeders’ Cup Filly & Mare Sprint (gr. I), and finished second by a nose at 18-1. Pool Play, a veteran of the synthetic track at Woodbine, famously upset the 2011 Stephen Foster Handicap (gr. I) on dirt at Churchill Downs at odds of 36-1. Uncaptured shipped in off a series of races at Woodbine and won the 2012 Iroquois Stakes (gr. III) and Kentucky Jockey Club Stakes (gr. II) at Churchill Downs.

I could continue, but I think the point is clear: Don’t assume that a “synthetic track specialist” can’t be effective on dirt. Quite to the contrary, they often outrun their odds, making them horses to consider in all sorts of wagers such as the exacta and trifecta, where you can get rewarded for their inflated prices even if they finish second or third.
Racing