While many sports enthusiasts are already counting down the hours for the kickoff of Sunday's Super Bowl, both thoroughbred racing and standardbred racing will have plenty to ponder on Saturday with quality events being contested during the day at Aqueduct and Gulfstream and later that night at the Meadowlands and Yonkers.

Saturday afternoon thoroughbred racing fans will get an early glimpse into the talent of this year's three-year-old crop when Aqueduct hosts the Grade III Withers Stakes at one-mile and one-sixteenth over the inner track and Gulfstream Park offers the Grade II Holy Bull at the same distance. Both races feature proven commodities, although onlookers will want to see which runners are capable of moving forward heading into the Kentucky Derby on the first Saturday in May.

Fresh off a sharp score in his sophomore debut against open stakes company, El Areeb (Trevor McCarthy) will seek to garner the first graded stakes tally of his career on Saturday in the Withers at Aqueduct. Trained by Cathal Lynch, El Areeb has won three of five starts overall and banked nearly $185,000 and is among the budding stars in this division. He will likely look to stretch his speed through both turns of the one-mile and one-sixteenth affair as the solid 3-4 favorite. 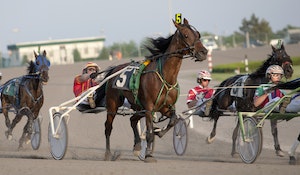 That same afternoon at Gulfstream Park, Breeders Cup Juvenile hero and champion two-year-old colt Classic Empire will make his three-year-old debut in the Grade II Holy Bull Stakes. Classic Empire has been virtually unbeatable when he minds his manners and his lone setback last fall was somewhat self-inflicted. Classic Empire is the lukewarm future book favorite to capture the Kentucky Derby right now, but he does not have to win every step of the way in order to succeed at Churchill Downs in three months. Gunnevera draws the rail and figures to make his presence known throughout this two-turn affair, one in which onlookers may not place too much emphasis in three months time.

That same evening at Yonkers Raceway, the older pacers will be on display in a number of competitive overnight events.

In the featured seventh, the $45,000 Open Handicap, one in which all eight posts were assigned, Long Live Rock (Daniel Dube) gets post two following a very good second-place effort in his seasonal debut last week for trainer Rene Allard. Milliondollarwave moves up off a win in the Preferred Handicap, while Lucan Hanover and Roland N Rock look to regain their winning ways from assigned four and five slots. First Class Horse gets post six in his seasonal debut, while two-time defending Open champ again avoided the dreaded eight-hole assignment, just inside of Somewhere In L A, who was assigned the eight hole in this class last week and finished fifth.

One race later in the $35,000 Preferred Handicap, City Hall gets the rail after several unsuccessful tries in the Open. E Z Noah (Dube) and Limelight Beach both step up off second-place efforts, while Bettor's Edge (Mark MacDonald) gets assigned the eight hole following two sharp scores against conditioned foes. The former Ron Burke trainee posted the fastest clocking of the meet last week courtesy of his 1:51.3 score and looms a serious threat to climb back into the Open ranks and possibly back into the George Morton Levy Memorial Series.

One race later in a non-winners of $20,000 last five starts class, Make Some Luck (Dube) gets the rail and actually DROPS in class following a win against non-winners of $25,000 last five starts company here one week ago. Then in the finale, aged warriors Casimir Jitterbug and Sapphire City will start alongside one another in posts one and two, respectively, after missing last week. Sapphire City has won both of his starts this year for Burke after spending the previous part of his career in trainer Paul Blumenfeld's barn. In The Huddle gets some serious class relief after two tries in the Preferred and should be sharper.
Across the Hudson River at the Meadowlands on Saturday night, the second half of the early daily double is an intriguing non-winners of two races or $20,000 lifetime event for younger horses. Dover Downs invader Highlander (Victor Kirby) won his most recent outing in 1:52.3 for trainer Jenny Bier and looms a serious contender in this spot, while Timcat Hanover seeks his second straight tally for trainer Tom Fanning and Djnorthernstar (Drew Monti) looks for his first triumph in four starts on the season.

Then right at the midway point of the card, Missile J (Jonathan Roberts) seeks his second straight score for trainer Scott DiDomenico after spending the first two years under the tutelage of trainer Linda Toscano. In fact, Missile J enjoyed a solid sophomore campaign last year with an 8-2-2 slate and $315,000 bankroll from only 19 outings. Rockin Robert (Brett Miller), has won two of three starts this year and figures to improve off a third-place effort last week which came after missing the week before.

Then one race later in the feature, a non-winners of $16,000 last five starts class for older pacers, Doctor Butch again looms a very vulnerable favorite in this spot, especially against the likes of Alexie Mattosie (John Campbell) and Ontario Success (Joe Bongiorno), who endured a brutal trip last week and faded to seventh as the 7-5  choice in this spot for Burke.
Racing
Loading...