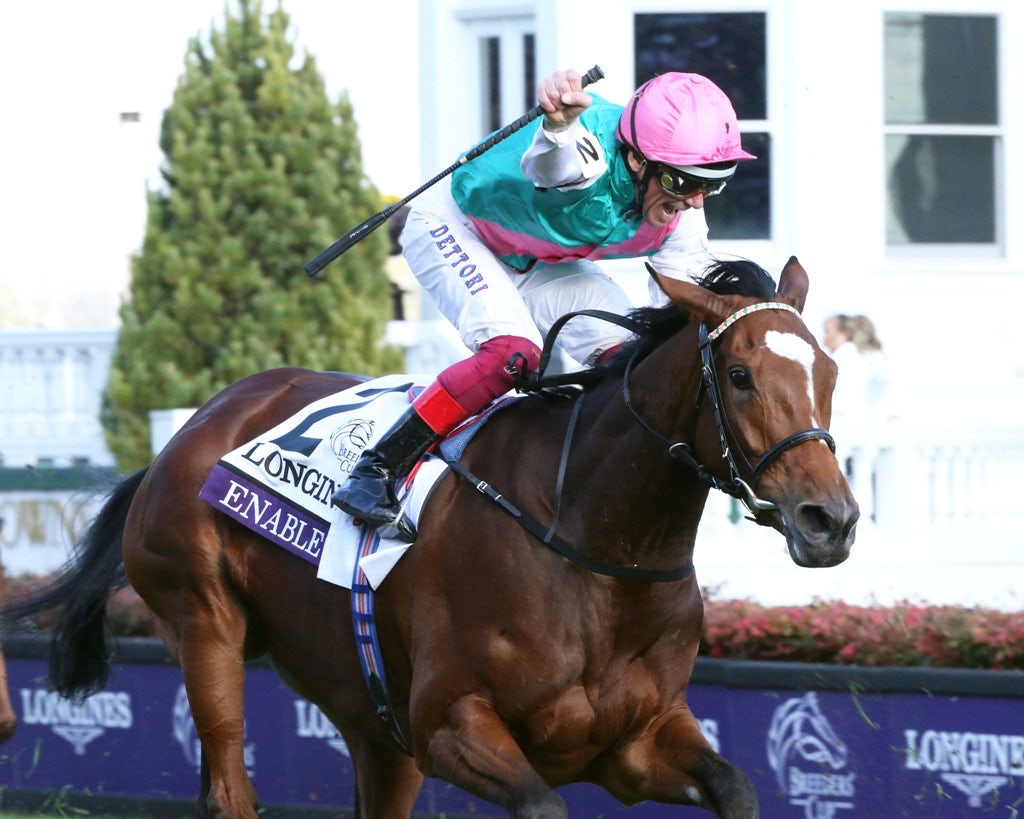 No matter how you slice it, the 2018 Breeders’ Cup at Churchill Downs was a clear-cut success.

Total wagering may have been down slightly from 2017, but the figures were still strong overall, and the racing was nothing less than top-notch. A decision to move all of the juvenile races to Friday (while transferring the historic Distaff back to Saturday) was an inspired idea, giving the two-year-olds a chance to shine on day one while the sport’s established stars took center stage on day two.

Handicappers in search of winning longshots may have been a bit disappointed, as only one horse prevailed at odds of 7-1 or higher, but the preponderance of short-priced winners was appealing from a sporting perspective as big-name runners ran to their odds and delighted fans with thrilling performances.

Looking back on these two glorious days of racing, here’s how I would rank the Top 10 highlights…. No horse had ever won the Prix de l’Arc de Triomphe (Fr-I) and the Breeders’ Cup Turf in the same season, but the superstar filly Enable broke the Arc/Turf jinx with her sensational victory at Churchill Downs. Under a perfect ride from veteran jockey Frankie Dettori, Enable gamely out-battled fellow filly and European shipper Magical to prevail by just under a length while leaving the rest of the field nine lengths behind. Amazing!
Newspaperofrecord looked like the winner of the Breeders’ Cup Juvenile Fillies Turf from the moment she burst out of the starting gate and assumed a three-length lead after the first quarter-mile. From there, she was never headed, and when jockey Irad Ortiz, Jr. asked her to go at the top of the stretch, she burst clear of her rivals with breathtaking and almost unprecedented authority to win by 6 ¾ lengths while eased up at the finish. Trained by Chad Brown, Newspaperofrecord looks like a young turf star in the making!
Maybe it wasn’t as flashy as the efforts turned in by Enable and Newspaperofrecord, but Accelerate capped off a phenomenal season with his victory in the Breeders’ Cup Classic, which marked his fourth Grade 1 win going 1 ¼ miles this year. The four-wide move he made to seize the lead around the far turn would have been difficult for many horses to sustain, but Accelerate stayed strong to the wire to throw his name in the ring for Horse of the Year honors.
The Breeders’ Cup Sprint was supposed to be a very competitive race, but instead, the defending winner Roy H turned it into a one-horse procession. After settling three lengths off a blazing opening quarter-mile, Roy H unleashed an unbelievable mid-race move to seize command in effortless fashion. From there, no one could come remotely close to challenging as Roy H powered through the homestretch to win by 3 ¼ lengths, in the process securing his second straight victory in the Sprint.
The undefeated Game Winner had every excuse to lose the Juvenile after racing very wide on both turns and getting bumped in the homestretch, but the Bob Baffert-trained son of Candy Ride battled on gamely to win clearly in the end, stamping himself as the early favorite for the 2019 Kentucky Derby.
Jockey Joel Rosario rode only eight of the fourteen Breeders’ Cup races, but he made the most of his opportunities. He was aboard Accelerate in the Classic and Game Winner in the Juvenile, and he also guided the front-running filly Jaywalk to victory in the Juvenile Fillies. That’s three wins aboard three probable Eclipse Award champions—not a bad weekend, right?
Much like Accelerate, the three-year-old Monomoy Girl capped off a near-perfect season with a defining victory in the Breeders’ Cup Distaff, pressing the pace before taking over and beating her older rivals to the wire while picking up her fifth Grade 1 win of the year.
It took Stormy Liberal the length of the homestretch to wear down World of Trouble and win the Breeders’ Cup Turf Sprint for the second year in a row, but while his margin of victory (a neck) wasn’t eye-catching, the margin back to the third-place finisher was jaw-dropping—7 ¼ lengths. That’s unprecedented for a turf sprint of this caliber, and when the numbers were crunched, Stormy Liberal received a tremendous 119 Beyer, the highest number assigned on turf all year long.
Similar to Newspaperofrecord, City of Light never really gave his rivals a chance in the Breeders’ Cup Dirt Mile. He simply got out in front and sprinted his pursuers off their feet through increasingly testing fractions of :22.64, :45.16, and 1:09.03. By the time the field turned for home, City of Light was well in command, eventually prevailing by 2 ¾ lengths in the terrific time of 1:33.83, which missed the track record by just 0.57 seconds. A tour-de-force performance!
Trainer Chad Brown got his start just a decade ago, but already he’s won a dozen Breeders’ Cup races and has averaged two wins per year since 2014. Like clockwork, Brown secured his two Breeders’ Cup wins in 2018 with Newspaperofrecord in the Juvenile Fillies Turf and Sistercharlie in the Filly & Mare Turf, two divisions that he’s dominated in recent years.
What were your favorite moments of the 2018 Breeders' Cup?
Racing