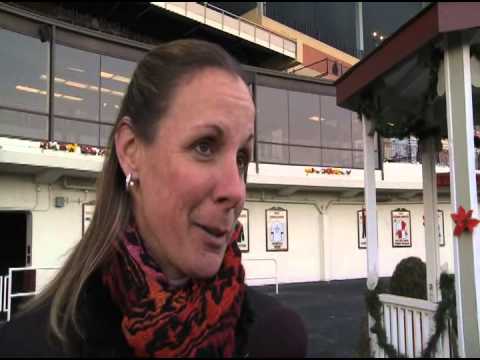 ** Pictured above, Maria Borell, Jena Antonucci and Abigail Adsit. All three train for Drawing Away Stables.

As expected, Runhappy's former trainer, Maria Borell, landed on her feet. On Dec. 21, Drawing Away Stable hired Borell to train horses at Gulfstream Park. She joins a terrific group of conditioners including Jorge Navarro who campaigned Private Zone for Good Friends Stables in 2015. Borell joins a stable that already has two prominent women conditioners on staff in Jena Antonucci and Abigail Adsit. Both Antonucci and Adsit are well-regarded trainers that are able to get the most out of their charges on a daily basis.

This is good news for Borell who had an exceptional 2015 with Runhappy. The Breeders Cup Sprint Champion provided one of the most impressive performances of the day. In fact, Runhappy's performance was only eclipsed by American Pharoah's in the Breeders Cup Classic. It's nice to see that the young trainer got a job so quickly after the less than amicable way that Runhappy's owner James McIngvale released her of her training duties.

But as good as 2015 was for Borell, she didn't make it into the Top 5 of women trainers for 2015 based on earnings. Neither did Antonucci nor did Adsit. The list is below.

22. Patricia Farro - Farro ranked 12th by wins in 2015. Farro's horses earned an awesome $5,181,529. She saddled 166 winners, 153 second place horses and 192 third place finishers from 1,120 starts. her most well-known horse in 2015 was probably Bold Thunder who finished second to Maryland legend Ben's Cat in the Jim McKay Turf Sprint. Farro trains horses at all levels. Here ability to work with horses of all ages and all levels makes her a favorite to follow. Many a horseplayer starts his or her day by finding out who Farro has entered that day.

58. Michelle Nevin - Michelle Nevin didn't saddle a graded stakes winner in 2015. She did train By The Moon, who finished second in both the Grade 1 Acorn Stakes and third in the Grade 1 Test. By The Moon ran too well to lose in the Acorn. Nevin saddled only 348 horses in 2015. She won an incredible 53 of those races with 50 second and 54 thirds for $2,632,528 in earnings. It's likely that By The Moon turns into one of the top four-year-old fillies in the nation in 2016.

89. Josie Carroll - One of Josie Carroll's most impressive horses in 2015 was Gamble's Ghost. Carroll is known for winning races at Woodbine, her home track. She was born in Ontario. Her 2015 was spectacular based on the number of horses that she saddled. Carroll saddled only 175 horses in 2015. Her horses won 35 races, finished second 25 times and finished third 26 times. Caroll's charges earned $2,075,252 in 2015. Will Carroll own Woodbine again in 2016? There's a distinct possibility.