The 1990’s brought us some of the most important events in American History. The Soviet Union collapsed in 1991. The end of the Cold War occurred in 1992. Nelson Mandela was elected President of South Africa in 1994 and who can forget the O.J. Simpson trial, or Tiger Woods winning the Masters in 1997 at the age of 21?

In thoroughbred racing, the 1990’s was when the Bob Baffert barn took shape and Bill Mott unleashed the amazing Cigar. The Breeders’ Cup really hit its stride in the 1990’s while the Dubai World Cup Festival burst onto the horse racing scene in 1996.  Some of the greatest jockeys of all time, many who are still riding, developed their game in the 1990’s. Below is my Top 5 list. 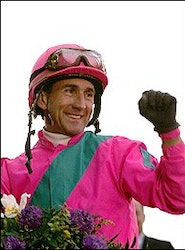 1st - Jerry Bailey Some handicappers regard Jerry Bailey as the greatest jockey to ever live. The 1990’s belonged to Bailey who won 3 Eclipse Awards for Outstanding Jockey in the decade in 1995, 1996, and 1997.  Bailey won the Kentucky Derby twice, in 1993 with Sea Hero and 1996 with Grindstone. He also won the Preakness Stakes and Belmont Stakes aboard Hansel in 1991. Bailey won 9 Breeders’ Cup races in the decade. He was Cigar’s pilot during a 16 race win streak and rode him to victories in the 1996 Breeders’ Cup Classic and the inaugural running of the Dubai World Cup in the same year. But for all of his accomplishments.  Bailey’s most memorable ride for me was when he was aboard 133-1 long shot Arcangue in the 1993 Breeders’ Cup Classic. 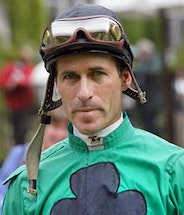 2nd - Gary Stevens Although it’s tough to keep Jerry Bailey out of the top spot, no horseplayer can fault those who want to make Stevens the number one jockey in the 1990’s. Stevens won only one Eclipse Award in the decade, in 1998, which is interesting because he entered the Hall of Fame in 1997. Gary Stevens dominated the Triple Crown races in 1995, 1997, and 1998. He rode Thunder Gulch to wins in the Kentucky Derby and Belmont Stakes in 1995. He rode Silver Charm to Derby and Preakness wins in 1997. Then, in 1998, he kept Bob Baffert, the trainer of Silver Charm, from winning the Triple Crown with Real Quiet in the Belmont Stakes. Gary Stevens nipped Real Quiet on the wire aboard rival Victory Gallop. Real Quiet’s loss in the Belmont might be the most heartbreaking Triple Crown near miss in thoroughbred racing history.  Stevens also successfully rode in the UK during the 90s. 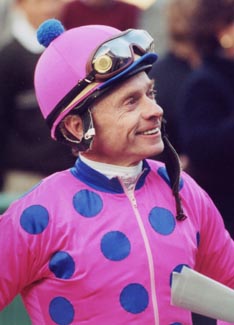 Technically, Chris McCarron sits on the borderline between the 1990’s and the 2000’s. The reason that I put him into the Top 5 in the 1990’s is because McCarron essentially retired after 2002. He rode once in 2008 and once 2011, but after 2002, McCarron didn’t ride regularly. Not only that, but McCarron’s winning rides aboard Alysheba in the Derby and the Preakness occurred at the tail end of the 1980’s in 1987. There really isn’t a category for best riders from 1987 to 2001. In 1996, McCarron rode Alphabet Soup to a win in the Breeders’ Cup Classic. Defending champion Cigar finished third in that race. McCarron won the Kentucky Derby aboard Go For Gin in the 1994 Kentucky Derby. He won the Preakness aboard Pine Bluff in 1992. In 1997, it was McCarron who denied Bob Baffert, Gary Stevens and Silver Charm the Triple Crown when he won the Belmont aboard Touch Gold. McCarron’s best ride was aboard Tiznow in the 2001 Breeders’ Cup Classic. Tiznow’s victory was so awe-inspiring that, as Steve Haskins writes in Bloodhorse, it’s the origin for the New England Patriots’ Dynasty. 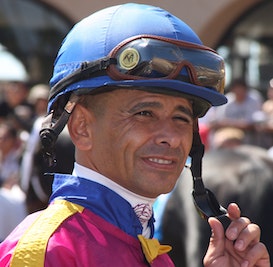 4th - Mike E. Smith Smith took home 2 Eclipse Awards, in 1993 and 1994, and dominated the BC Mile in 1992 and 1993 with Lure. He also rode Skip Away to a Breeders Cup Classic victory in 1997 after Jerry Bailey honored a previous commitment and took off Skip Away to ride Behrens.  Smith took down a total of 8 BC victories in the 1990’s. He also won the Preakness aboard Prairie Bayou in 1993. Perhaps, Smith’s most outstanding ride was in the 1995 BC Juvenile where Smith hustled the impeccably bred Unbridled’s Song to a victory over Hennessy. Unbridled’s Song has turned into a top stallion for Taylor Made Stallions. 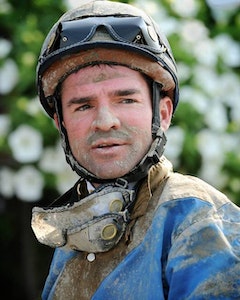 T5th - Kent Desormeaux/Eddie Delahoussaye There’s a tie at number five between Eddie Deahoussaye and Kent Desormeaux.  It’s awfully tough to knock Desormeaux’s ride aboard Real Quiet in the Belmont Stakes. He wanted to get the jump on Victory Gallop, who had finished second to Real Quiet in both the Kentucky Derby and the Preakness Stakes. Kent D. lost the Triple Crown by a nose. That’s horse racing and another example of why winning the Triple Crown is so difficult. It’s only happened 11 times in thoroughbred racing history.  Desormeaux rocked it in the 1990’s. Not only did he ride Real Quiet, but he also rode Kotoshaan, the 1993 Horse of the Year. Desormeaux won an Eclipse Award in 1992. Like McCarron, Desormeaux’s most famous win was in 2000. In that year, Desormeaux rode Fusaichi Pegasus, affectionately nicknamed FuPeg, to a Kentucky Derby win. 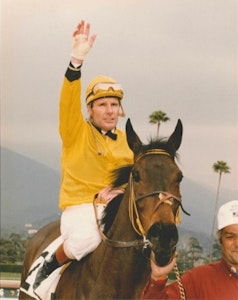 Eddie Delahoussaye’s best rides occurred in 1988, when he won the Preakness and Belmont aboard Risen Star, and 1992 when he won the Belmont aboard A.P. Indy. Risen Star is the only son of Secretariat to truly excel over the racetrack. I actually highlight Risen Star in my Kentucky Derby Failure to Triple Crown Glory article. Delahoussaye won 5 Breeders’ Cup races in the 1990’s including the BC Classic aboard A.P. Indy in 1992.
Racing
Loading...